Pinochet and Allende: a tale of treason 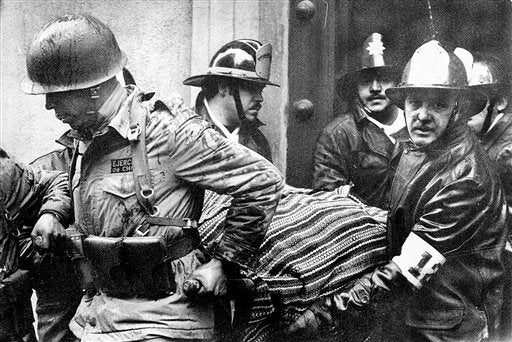 FILE – In this Sept. 11, 1973 file photo, soldiers and firefighters carry the body of President Salvador Allende, wrapped in a Bolivian poncho, out of the destroyed La Moneda presidential palace after a coup led by Gen. Augusto Pinochet that ended Allende’s three-year government. On Sept. 11, 2013, Chile marks the 40th anniversary of the coup. (AP Photo/El Mercurio, File) CHILE OUT – NO PUBLICAR EN CHILE

SANTIAGO – “Call Augusto, he’s one of us!” Chilean president Salvador Allende urged at the start of the 1973 coup, convinced of the loyalty of General Pinochet.

Little did he know then that the 58-year-old army chief would be the one to unseat him on that fateful September 11th 40 years ago, and eventually succeed him as the country’s leader.

Pinochet had taken the helm of Chile’s armed forces just three weeks earlier on the recommendation of his predecessor General Carlos Prats, who was assassinated along with his wife several months after the coup.

The unsuspecting Allende, a 65-year-old socialist doctor elected as head of a leftist coalition on his fourth try on November 4, 1970, had personally appointed Pinochet to the post.

“My father believed in (Pinochet) until the end because he was recommended to him by General Prats,” Isabel Allende, the daughter of the former leader and now a senator, told AFP.

“The betrayal must have been terrible for him.”

Years after the coup, the general-turned-dictator told one of his biographers that he had to “liberate the homeland from the Allende chaos and the Marxist cancer.”

Allende took power in 1970 with 36.3 percent of the vote after a life dedicated to politics.

Born on June 26, 1908, in the port of Valparaiso west of the capital Santiago, he completed his medical studies and was elected as a lawmaker at the age of 30. He went on to become health minister, and then spent years as a senator.

Once elected leader, Allende became a champion of democratic socialism, nationalizing copper production and telecommunications and launching agricultural reform before facing a destabilization campaign from the right backed by the United States.

Pinochet, born in Valparaiso on November 25, 1915, was not a good student and was twice rejected by the military academy.

“He suffered from severe migraines when he studied too much and only got average grades,” journalist Juan Cristobal Pena told AFP.

But he certainly knew how to seize an historic opportunity with cunning and sheer willpower no one could have imagined.

“Because of his aloof yet shrewd personality, he sensed from the outset that he was not aligned with anyone and that he could impose his will,” said Gonzalez, who wrote a book about the anti-Allende plot.

The cruelty that marked his 17-year dictatorship and would claim 3,200 lives became clear on the day of the coup.

“An offer was made to him to get him out of the country … and the plane goes down, old chap, in full flight,” he said via radio to another military official negotiating Allende’s surrender.

But the socialist president would stay loyal to his promise to die for democracy, putting up a fight with a gun given to him by Fidel Castro before committing suicide in the presidential palace.

A victorious Pinochet ruled Chile with an iron fist.

The general “was aware that he was aware of being despised by his peers,” said Pena.

“Once in power, he took care to eliminate those who could spell trouble.”

With followers of US economist Milton Friedman, Pinochet imposed an ultra-liberal model that sparked an economic take-off in Chile after a series of privatizations – but at the cost of deep social inequities.

In 1988, the general lost a referendum on whether he should remain in office until 1997.
In 1990, he relinquished power to Christian Democrat Patricio Aylwin but stayed on for eight years as head of the army. He then served as senator for life.

It was under the guise of parliamentary immunity that he traveled to London in 1998 for medical check-ups.

It was there, on October 16 of that year, that he was arrested on the back of a Spanish court order accusing him of crimes against humanity.

Placed under house arrest for 503 days, he was later released for health reasons.

Upon returning to Chile, he lost his political influence and began to be scrutinized by local authorities.

But he died on December 10, 2006 of a heart attack without being convicted of crimes he always denied committing.

“It’s not true and even if it were, I don’t remember,” he told a magistrate one year before his death.