Pork in a time of cholera in Virac 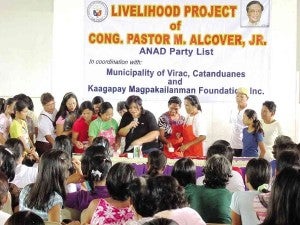 JUST a day after tens of thousands of people rallied at Manila’s Rizal Park to demand a stop to the pork barrel system, Rep. Pastor Alcover Jr. of the Anad party-list group plasters his face on a streamer announcing a training program for making “ube” jam and banana chips in Virac town, Catanduanes province. FERNAN GIANAN/ INQUIRER SOUTHERN LUZON

VIRAC, Catanduanes—Just months after a province-wide cholera outbreak killed eight people in this capital town alone during the first half of last year, the arrival of P33.5 million in pork barrel  from four party-list groups and a senator would have been welcome news for local officials.

This town and the entire province badly needed potable water and sanitary facilities for villages that had been deprived of those for decades and which could have been the sources of cholera.

Instead, the P33.5 million was handed over to a nongovernment organization (NGO) which is on the list of 82 NGOs described by a recent Commission on Audit (COA) report as “dubious” and suspected of having siphoned off P6 billion of public funds through the pork barrel system from 2007 to  2009.

The amount easily dwarfed the P2.5 million that the administration of then Mayor Jose “Cito” Alberto II set aside this year for the construction, improvement and repair of deep wells, waterworks, public toilets and septic tanks in several villages hard-hit by the cholera outbreak.

Alberto, whose term ended in June, has been replaced by his wife, Flerida Antonio-Alberto, who is now carrying out her husband’s projects.

Despite the controversy involving the pork barrel, or Priority Development Assistance Fund (PDAF), and just after the Million People March against pork at Manila’s Rizal Park, the municipal government of Virac separately released 90 percent of the P33.5 million in pork for several projects of the Kaagapay Magpakailanman Foundation Inc. (KMFI).

Documents furnished the Inquirer showed that the KMFI was the lone participant in the bidding conducted by the municipality sometime in April and June this year.

The bidding was for five projects charged to the pork of four party-list representatives and a senator, ostensibly for the municipality’s “Integrated Livelihood Development Program,” which ironically included a hog-raising project that would supposedly generate more livelihood and employment among local residents.

The first project, worth

The third party-list group, the Senior Citizens of Rep. David Kho, set aside P2 million for the supply of “Technology Kits

(Vol. I-V) and Seminars on Candle Making, Waste Recycling, Soap Making and Herbal and Ornamental Plants Propagation,” with the elderly as beneficiaries.

The fifth in the series of livelihood training sessions would also be provided by the KMFI courtesy of Sen. Vicente Sotto III’s

P5-million allocation for the supply and delivery of “Vermi-Composting and Vermi-Culture Training Materials and Supplies.”

Municipal accountant Lilian Baloloy, interviewed on Aug. 29, confirmed that 90 percent of the project amounts were released separately on Aug. 14, 16 and 20.

A check of the receipts issued by the  KMFI as well as disbursement vouchers showed the recipient and signatory was one Carlos L. Soriano as president of the NGO with office at 339 Stanpeco Bldg., Quezon Ave., Quezon City.

Exactly how this capital town came to be the lucky recipient of the funding, all of which Baloloy admitted were unsolicited, no one here seemed to know.

Baloloy said her office  received only the copy of the special allotment release order (Saro) for each project except for the Sotto funding, which she said was “downloaded” to the municipality by the Bicol regional office of the Department of Agriculture (DA) sometime in December 2012.

According to the records  Baloloy showed to the Inquirer, the Ako Bicol Saro was dated

The Saro for the funding from Sotto was received by the municipal government from the DA regional office sometime in December 2012,  Baloloy said.

Vice Mayor Roy Laynes, in a separate interview, told the Inquirer that the Sangguniang Bayan never passed resolutions requesting the party-list representatives or Sotto to fund the livelihood training.

“The funding allocation was just sent to the LGU (local government unit) by the concerned party-list congressmen,” he said.

The Inquirer tried to get the side of Mayor Antonio-Alberto, particularly on how the projects came about, but her aide, Roger Zuñiga, said the mayor decided to keep mum.

The mayor’s office, through Baloloy, however, insisted that the five projects were not bogus and underwent public bidding.

It said the   KMFI  was accredited by the municipal bids and awards committee, with the invitation to bid published in a national paper, the name of which she could not recall. The bidding, according to the mayor’s office, complied with COA circulars, which accountant Baloloy insisted on.

Beginning July 29, hundreds of barangay residents flocked to a gymnasium in the capital town to attend the series of livelihood training sessions conducted by the  KMFI.

Mayor Antonio-Alberto, however, reportedly instructed facilitators from the Municipal Agriculture Office to screen the participants so that only five residents per barangay, who are 18 years old and above, and recommended by the chairs of the town’s

63 villages, are accommodated, according to a source who asked not to be named due to the sensitivity of the issue involving the pork barrel.

The facilitators were also told not to accept those who have already attended previous training sessions, as well as those who brought children along. This means that for each session, only 315 participants would be allowed.

Despite the instructions, a number of residents managed to sneak in by pleading that they be allowed to join and by changing their first names to avoid detection by the secretariat, according to a source who asked not to be named.

Aside from the free snacks and lunch provided by a caterer, the participants were also given P100 each per day in pocket money. Except for the Sotto vermiculture training, all the other projects’ livelihood seminars have been completed as of Aug. 23, for a total of four training sessions.

No total number of participants was given but it could not be more than 2,000 in all, with numbers ranging from 300 to 400 per session, according to sources.

This means that fewer than 2,000 residents directly benefited from the millions of pesos in pork from the party-list groups, and the impact of the projects is uncertain.