Why fewer working-age Americans are working 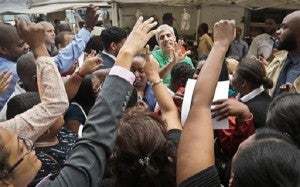 In this Thursday, Aug. 8, 2013, file photo, applicants reach for registration forms to attend a combined Metropolitan Transportation Authority (MTA) and Harlem Week job and career fair at Columbia University in New York. The drop in the unemployment rate in August to a 4½-year low was hardly cause for celebration. The rate fell because more people stopped looking for work. AP

WASHINGTON—The drop in the unemployment rate in August to a 4½-year low was hardly cause for celebration. The rate fell because more people stopped looking for work.

More than 300,000 people were no longer working or looking for a job. Their exodus shrank the so-called labor force participation rate — the percentage of adult Americans with a job or seeking one — to 63.2 percent. It’s the lowest participation rate since August 1978.

Once people without a job stop looking for one, the government no longer counts them as unemployed. That’s why the unemployment rate dropped to 7.3 percent in August from 7.4 percent in July even though 115,000 fewer people said they had jobs.

If those who left the labor force last month had still been looking for work, the unemployment rate would have risen to 7.5 percent in August.

Back in 2000, the participation rate hit a high of 67 percent. At the time, women were pouring into the labor force. But women’s participation fell modestly through the mid-2000s — then dropped sharply from late 2009 through 2013.

Women’s participation rate was 57 percent last month, down from a peak of 60 percent in 2000.

For men, the participation rate fell last month to just below 70 percent — its lowest point on records dating to 1948. Men’s participation peaked in 1949 at 87 percent and has declined gradually in the decades since.

In a 2011 report, the Congressional Budget Office noted that the recent drop in women’s participation was particularly steep among those with dependent children and well-educated women married to high-earning men.

Another factor in the declining participation is that the oldest baby boomers have reached retirement age.

Many Americans without jobs remain so discouraged that they’ve given up on the job market. Others have retired early. Younger ones have enrolled in school.

Some Americans have suspended their job hunt until the employment landscape brightens. A rising number are collecting disability checks.

“It’s not necessarily people retiring,” Bovino says. “It’s young people going back to school” rather than taking their chances on a weak job market.

It isn’t supposed to be this way. After a recession, a brightening economy is supposed to draw people back into the job market. But it hasn’t happened. Labor force participation “certainly shouldn’t be at current levels,” Alexander says.

There aren’t enough jobs being filled. Employers are hiring about 4.3 million people a month — before layoffs, dismissals and resignations. In 2007, before the Great Recession, they were hiring 5.2 million a month.

There are three unemployed people, on average, competing for each job opening, compared with 1.8 when the recession officially began in December 2007.