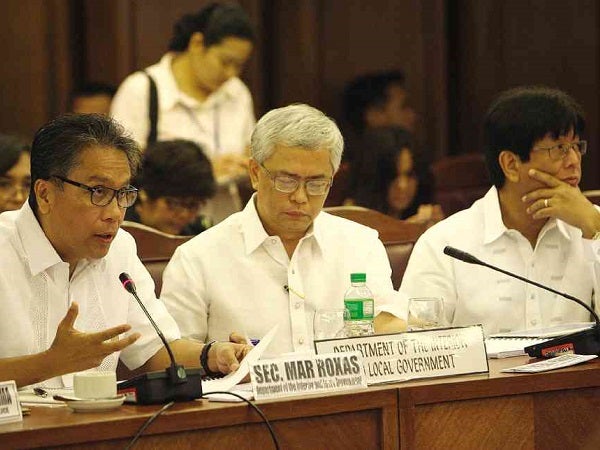 BADGERED AT BUDGET HEARING During the 2014 budget hearing in the House of Representatives on Friday, Interior Secretary Mar Roxas loses his cool as he’s repeatedly asked about his political plans for 2016. At right are Undersecretaries Austere Panadero and Rafael Santos. MARIANNE BERMUDEZ

The question irked Interior Secretary Mar Roxas, who appeared in the House of Representatives on Friday to defend his department’s proposed P99.6-billion budget for next year.

Roxas found himself piqued by ACT Teachers Rep. Antonio Tinio for bringing up presidential politics during the budget deliberations.

Tinio asked the question “for the record,” citing “perceptions” that some programs of the Department of the Interior and Local Government (DILG) “may be politicized because it is perceived that the secretary will be running for President.”

Roxas, the Liberal Party’s original choice for standard-bearer in 2010 but who stepped aside to give way to then Sen. Benigno Aquino III, retorted that he was “focused on doing my job and not on intrigues and looking at 2016.”

“As regards this question about 2016, perhaps it is more in the mind and imagination of people who want to intrigue rather than those who are focused on doing their job,” Roxas said.

Tinio said he was taking the answer as a “no.”

President Aquino, the titular head of the Liberal Party (LP), has been criticized in the press and on social media for receiving Janet Lim-Napoles, the alleged mastermind behind the P10-billion pork barrel scam, when she surrendered to him in Malacañang on the night of Aug. 28.

In defense of breeding

The President explained in a talk with Inquirer editors and reporters on Aug. 29 that he wanted to impress on everyone in charge of security how serious he was in wanting to keep Napoles alive.

Napoles claimed there was a grave threat to her life, and the President acknowledged the possibility of a threat coming from some people with whom she had dealings and who wanted to “hide their tracks” from investigators of the pork barrel scam.

Roxas, seen as being groomed by President Aquino for the presidency, also did not get away from criticism in the press and on social media for a supposed “slip” in a talk with reporters when he referred to Napoles as “Ma’am Janet.”

‘Not entitled to his own facts’

But he had defenders who pointed out his breeding as the reason for his courteousness, even toward a suspect.

Roxas also did not like it that Navotas Rep. Toby Tiangco earlier accused the DILG of having a P1.9-billion allocation that might be used as pork barrel for the LP.

Tiangco, secretary general of the United Nationalist Alliance, questioned the wisdom of giving the amount to the DILG for such projects as housing for informal settlers (P1.24 billion), potable water (P573 million), and climate change adaptation projects (P76 million).

“Why would we give extra appropriations to the DILG for housing, a water system and climate change when there is already budgetary support for key government agencies handling these concerns?” Tiangco asked in a previous statement.

“Are climate change and housing core competencies of the DILG?” he asked.