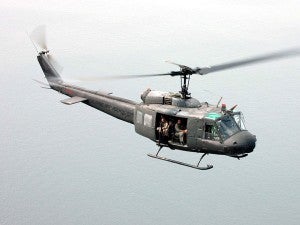 MANILA, Philippines—Bidding for 21 refurbished Huey helicopters was declared a failure for the third time on Friday after it fell short of requirements, delaying anew the military’s bid for increased air mobility.

At a bidding conference at Camp Aguinaldo, a joint venture  of US-based Rice Aircraft Services Inc. and Eagle Copters Limited failed to satisfy requirements on previous contracts, and at the same time had issues on the signatories in some documents, with a number of them lacking the needed official signatures.

“While it is unfortunate that we have to declare the (failed) bidding, we are still going to pursue the implementation of this project,” Defense Undersecretary and chairman of the Bids and Awards Committee Fernando Manalo said.

The helicopters, meant to be used for last May’s midterm elections, would also boost the mobility of troops during disaster operations and in fighting insurgency. However, bidding for the P1.26 billion poject failed twice, first in December and again in February.

Four of the eight companies which brought documents were present, but only one participated in the bidding. Under Republic Act 9184, even one applicant is qualified to bid for a project so long as it meets the requirements.

“It is an option that were are going to consider,” he said.

“Honestly I am deeply saddened. We get 20 storms a year and this is one of the primary equipment we use during disaster. We know that our troops need this on the field throughout the country, and also for our economic development we use it,” Manalo said.

“These are cases that is truly saddening and unfortunate, but what is important is we do not set this aside,” he said. “We can assure you that although we are saddened, we will be more aggressive in pursuing modernization.”

The UH-1H is the primary helicopter of the Philippine Air Force. There are currently 79 Hueys in the Air Force inventory, 33 are beyond economical repair, 25 are recoverable but would need a budget for repair,  while only 21 are operational.

A former Air Force pilot himself, Manalo expressed confidence with the government’s choice of Hueys instead of other helicopters, saying it ranks fourth out of 10 best helicopters in the world.

“We have been using this for so long, we are familiar with it and that’s important,” he said, adding that spare parts of Hueys are available in the next 20 years.

“Even if we are blindfolded, we are familiar with its parts,” he said.