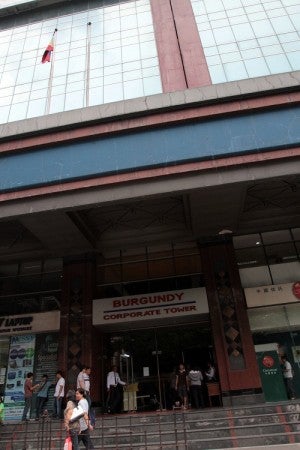 MANILA, Philippines – Forty-six people were still in police custody Friday morning following the shooting at the Burgundy Corporate Tower in Makati on Thursday in which one security guard was killed.

Of the 126 security guards hired by the old and new board of directors of the 38-story building, 80 have been released after they were questioned and their firearms confiscated for ballistic exams, said Senior Superintendent Manuel Lukban, Makati police chief.

The shooting between two security agencies around 5:30 p.m. on the driveway of the building on Gil Puyat Avenue stemmed from a dispute between the old board led by Roger Serafica and the newly elected board led by president Ramon Garcia.

The two boards are fighting for control of the 10-year-old building constructed by Burgundy Realty Corp. led by Roger Serafica in 2003.

On Thursday afternoon, the Makati court sheriff arrived at the Burgundy to enforce a temporary restraining order from the Makati regional trial court Branch 66.

The TRO issued by Judge Joselito Villarosa on Thursday prevented Serafica and the directors of the old board from exercising their power and functions in the building.

But the sheriff was met with resistance by a hundred members of the Swag security agency employed by the Serafica group, who according to the newly elected board, had started taking over the building last year.

Shots were fired between 5:30 p.m. and 6 p.m. as the sheriff was about to enter the building, hitting a certain Jimmy Lagunsad, a guard of the Sidekick agency, one of the two security agencies hired by the new board.

The counsel of the new board Ben Malcontento had said no exchange of fire took place since the shots came only from inside the buildng.

Lukban, however, said that the results of initial police investigation showed otherwise.

“Based on what our investigators saw, there are traces that the security group outside fired back,” Lukban said.

Investigators saw some bullet holes on the wall apparently caused by shots fired from the outside the building.

The Makati police are now investigating who fired the shot that killed the security guard, he said.

“We are still trying to determine if the security guards who fired their guns were acting on orders from the Serafica group and if there was a conspiracy,” Lukban said.

Nilo Santos, chairman of the new board of Burgundy, said it was now business as usual at the building.

“The Makati police have restored peace and order and they have ordered that the temporary restraining order that gives the newly elected board the administration and management of the building shall be followed,” Santos said.

Santos said he believed that the old board of directors ordered the shooting and should be held criminally liable.

1 killed, 1 injured in shootout at Burgundy Tower in Makati