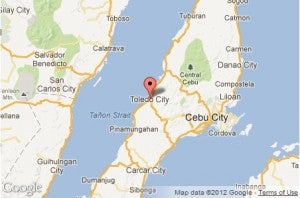 CEBU CITY, Philippines — Two persons were killed when lightning struck two villages of Toledo City while hail hit at least three villages of nearby town of Pinamungajan on Wednesday.

The two fatalities were identified as Marites Lacheca, 37, a resident of  Sitio (sub-village) Bawod, Barangay (village) Magdugo, and  Victoriano Macaday, a security guard and a resident of Barangay Biga, both in Toledo City.

The Toledo City police said Lacheca, a mother of four children, was doing the laundry outside her house when she was struck by lightning at 1:30 p.m. Wednesday.

Magdugo barangay councilor Max Macapobre said Lacheca’s children had asked their mother to get inside their house because of the series of lightning but she refused.

Macapobre said Lacheca who died on the spot had black marks on the body, especially her neck.

Meanwhile, Erna Ricacho, nurse on duty at the Carmen Copper Corporation Hospital in Toledo City confirmed that Macaday was pronounced dead on arrival at the hospital 1:30 pm.

Nurse on duty Erna Ricacho said the persons who brought Macaday told the hospital staff that the victim was fixing something outside the house when he was struck by lightning.

Ricacho, however, said the hospital doctor had yet to give official report on the cause of his death, which has yet to be recorded at the Toledo City police station blotter.

In Pinamungajan town, hail or freezing rain was experienced in the barangays of Binabag, Poblacion and Pandacan, also on Wednesday.

Police Officer 2 Carlos Barluado happened to be in barangay Pandacan when he noticed hail the size of ice cubes falling down with the rain at around 1:40 pm.

Barluado said some people who were afraid of what they believed as unusual occurrence in the town hid inside their houses.

But Barluado said he was able to take video of the hail, which lasted for two minutes.

He said not much hail accompanied the rain, but some plants were also damaged in Barangay Pandacan.

Paller, Pinamungahan chief of the police, said a minor waterspout simultaneously hit also in Sitio Pondol, Binabag, damaging the roof of two houses, owned by Emilie and Analie Obatay, which were made of light materials.

The Philippine Atmospheric, Geophysical and Astronomical Services Administration (Pagasa) in Cebu had issued a thunderstorm alert in several areas of Cebu, including Toledo City and Pinamungajan.