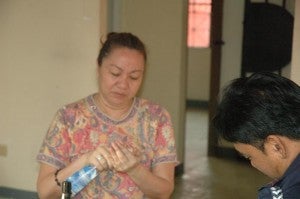 And it seems the new regimen is working for the jailed businesswoman, whose blood pressure and sugar levels stabilized Wednesday, said Radyo Inquirer 990AM.

Napoles, who is being held at Fort Sto. Domingo in Sta. Rosa, Laguna for serious illegal detention, was given a “no pork menu” Tuesday and was instead served fish, vegetables and fruit, the report said.

Authorities and the media have been monitoring the businesswoman’s health since she was brought to the police training camp in Laguna early Sunday morning.

Napoles lawyers’ earlier said they would not request for a hospital arrest despite her medical condition.

Sindac said doctors would decide if she needed to be brought to a hospital while security protocols would be followed during the transfer.

Meanwhile, whistleblower Benhur Luy’s lawyer Levito Baligod said they would not oppose hospital arrest as long as Napoles would be confined in a government medical facility.

Napoles, who was charged with serious illegal detention of Luy, is being accused of orchestrating the P10 billion “pork barrel” scam allowing the liquidation of lawmakers’ Priority Development Assistance Fund through alleged bogus non-government organizations.