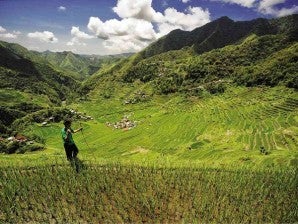 MANILA, Philippines — Farmers and environmentalist groups on Tuesday vowed to do everything they could to stop the release of genetically modified “Golden Rice” in farms and markets owing to its purported health and environmental risks.

In a statement, Jaime Tadeo, spokesperson of the National Rice Farmers Council, accused producers and developers of Golden Rice of “sugarcoating” the Vitamin A-enriched product to give “a humanitarian face” to GMOs, or genetically modified organisms.

“Golden Rice has long been rejected by Filipinos and in other parts of the world. Its creators are using this to improve their image and we know they are waging a major public relations campaign to win the hearts of Filipinos and get this GMO rice in our food on the table,” he said.

Research and development of Golden Rice started in 1992 with the prototype released eight years later by Syngenta, the third largest seed company and biggest agro-chemical company in the world, according to Greenpeace.

The first generation Golden Rice had low concentrations of beta carotene, the precursor of Vitamin A, and would have required people to consume 12 times their normal rice intake of rice to obtain the recommended dietary allowance of Vitamin A, based on a Greenpeace study in 2001.

In 2005, the Golden Rice Project, supported by companies like Syngenta that owned patents on genes and processes involved in Golden Rice, produced the second generation Golden Rice (GR 2) that supposedly had more beta carotene.

“I am warning my fellow farmers, once the government approves the Golden Rice, this will undoubtedly mix with our seeds and we will not be able to claim our farms as truly organic. What will happen to our thrust of exporting specialty or organic rice to other countries?” Tadeo said.

The farmers appealed to Agriculture Secretary Proceso Alcala to deny the entry and releases of GMOs into the country, particularly Golden Rice “because it will not only cost the country its emerging niche in rice exports but also endanger the country’s biodiversity and poses unknown risks to human health.”

“We don’t see any benefit in allowing GMOs into the country. It will not increase our yield that will improve our income. Even the Vitamin A component of Golden Rice cannot be ascertained by its sponsors,” said Tadeo.

Greenpeace noted that the IRRI, which has been leading the development of Golden Rice, admitted in a statement dated Feb. 26 and posted on its website that “it has not yet been determined whether daily consumption of Golden Rice does improve the vitamin A status of people who are vitamin A deficient and could therefore reduce related conditions such as night blindness.”

“If Golden Rice is approved by national regulators, Helen Keller International and university partners will conduct a controlled community study to ascertain if eating Golden Rice every day improves vitamin A status,” it added.

“Syngenta may not be after large profits in releasing Golden Rice, per se. They saw this as a big opportunity to increase the brownie points of GMO by presenting this as a humanitarian program for the Philippines,” Tadeo said.

He raised concerns that other GMO companies would gain entry into the Philippines, and “that is when they will be able to corner big stakes for the company.

Tadeo said his group was linking up with consumer and environment groups in their campaign to keep Philippine rice GMO-free.