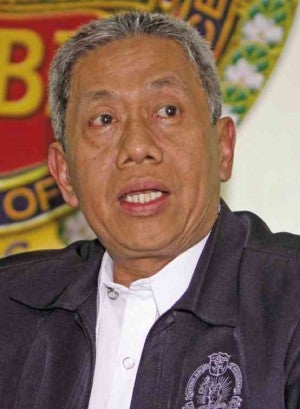 National Bureau of Investigation Director Nonnatus Rojas, hurt by President Aquino’s statements to the Inquirer last week that tended to cast doubt on the NBI’s integrity, resigned on Monday.

Justice Secretary Leila de Lima announced Rojas’ resignation, which she said would become effective when accepted by the President.

But De Lima said she sent President Aquino a letter asking him “wholeheartedly, firmly and unequivocally” not to accept Rojas’ resignation.

“I don’t want to lose a good man,” she said, referring to Rojas, in a text message she sent to reporters after she announced the NBI chief’s resignation at the Department of Justice.

“He believes [resigning] is the most honorable thing to do because of the cloud of doubt that may have been cast on the NBI as an institution and on him as the leader of the institution,” De Lima said minutes after seeing Rojas.

In a talk with Inquirer editors and reporters on Thursday night, President Aquino said that after Napoles had surrendered to him in Malacañang on Wednesday night, he turned her over to the police and not to the NBI because there were “less trustworthy” officials in the bureau.

Aquino did not name the officials but said charges would be brought against two for tipping off Napoles about the issuance of a warrant for her and her brother Reynald Lim’s arrest by the Makati City Regional Trial Court on Aug. 14, enabling them to dodge the arresting officers.

The two NBI officials allegedly have links to two senators who have been linked to the pork barrel scam, and one of the officials is said to be the mole of one of the senators in the NBI.

The President said details of NBI operations for the capture of Napoles had also been leaked.

He said even Napoles’ surrender to him in Malacañang minutes after he had told De Lima about it was leaked.

Aquino did not allude to Rojas, but apparently the NBI chief is taking responsibility for the actions of the two officials, both of whom are well-entrenched career officers with a hard-core following in the bureau.

On Sunday, deputy presidential spokesperson Abigail Valte said the justice department was giving priority to the filing of charges against the two NBI officials.

But De Lima said on Monday that she believed the Inquirer misquoted the President in reporting that charges would be brought against the two NBI officials.

“I’m not aware of charges to be filed against two NBI executives,” De Lima said, adding that the justice department had yet to validate the information that the leak of the arrest order for Napoles had come from the NBI.

The Inquirer stands by its report.

De Lima said the story had been “played out” in the media, somehow affecting the integrity and credibility of the NBI.

But De Lima stressed that she agreed with the President that there are some “misfits and scoundrels” in the NBI whose activities “undermine the overall integrity and credibility” of the bureau.

She said she summoned Rojas early Monday after seeing his letter of resignation, which was addressed to President Aquino through her.

When Rojas arrived, she said she told him that she did not think the President was referring to him when he made statements to the Inquirer about “less trustworthy” officials in the agency.

She told reporters that Rojas did not state in his letter the reason for his resignation, but she stressed that it had to do “with the banner story” of the Inquirer on Sunday.

“I don’t think there was ever the intention of the President that he was referring to the entire organization,” she said.

De Lima also said she told Rojas that he still had her trust and confidence and that she believed the President felt the same way, too.

But Rojas insisted on resigning, according to De Lima.

She said she hoped President Aquino would heed her recommendation not to approve Rojas’ resignation.

“In the report of the Inquirer, the institution is not the problem. There are some, in their words, who are less trustworthy,” Lacierda said. “Director Nonie Rojas has achieved a lot, which is why in our view, Secretary Leila de Lima’s recommendation to reject his resignation is justified.”

Lacierda pointed out that the NBI has done a number of big investigations on Rojas’ watch.

“You’ve got the Atimonan [rubout in January], you’ve got the Balintang Channel [shooting of a Taiwanese fisherman in July], and some other [cases]. And also there are a number of sensitive cases that are being handled by Director Nonie Rojas coming from Secretary Leila de Lima,” he said.

Lacierda said the President had taken no action about Rojas’ resignation.

De Lima said she was proud of the many achievements of the NBI. The bureau “delivered” in many high-profile investigations, she said.

“The reason why I’m making that recommendation is because we’re in a middle of a major and sensitive investigation and I trust Director Rojas and I think even the President [trusts him],” she added.

She was referring to the NBI investigation of the pork barrel scam, which had been expanded to include a probe of the alleged channeling of P900 million from the Malampaya Fund to Napoles’ bank account through bogus nongovernment organizations (NGOs).

The NBI is building a plunder case against Napoles and the lawmakers who disbursed allocations from their Priority Development Assistance Fund through Napoles’ fake NGOs.

De Lima also said she was “half-surprised” about the resignation of Rojas, whom she described as “quiet, low-key, soft-spoken and sensitive.”

She said it was the “prerogative” of President Aquino to choose to turn over Napoles to the police instead of the NBI, but she stressed that NBI agents had denied Napoles’ claim that they tried to extort money from her in the serious illegal detention case filed against her by the principal whistle-blower in the pork barrel scam, Benhur Luy.

De Lima also pointed out that Napoles did not trust the NBI because it was pursuing the cases against her.

Asked whether other NBI officials should also resign, De Lima said the next thing to do was to ask deputy directors at the NBI to resign.

“It’s an issue of institutional integrity. It would be good if the deputy directors would think of tendering their resignations, it should not be Director Nonie … It goes to show he’s very principled, it goes to show he has delicadeza (sense of propriety),” she said.—With a report from Gil C. Cabacungan