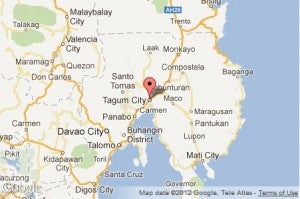 TAGUM CITY, Philippines–Two persons were wounded after being accidentally shot by a security guard of a mall here on Sunday, police on Monday said.

The shooting happened as 26-year-old Cadatu was checking his 12-gauge Armscor shotgun at his post at the mall when it accidentally went off, Gadingan said.

“Cadatu was cocking his service firearm three times and removed one bullet, apparently not knowing it was still loaded with one round of ammunition. He then pulled the trigger, causing the shotgun to go off downward, sending bullet pellets flying to different directions,” Gadingan told the Philippine Daily Inquirer by mobile phone.

Cuaton, who is also a mall employee, was hit in the back as she was walking along the road across the mall, while Divino suffered a bullet wound in the face and temple, the police official said.

He said the victims were rushed to Davao Regional Hospital and now under observation by physicians. The security guard surrendered to his superiors who turned him over to the police for possible filing of charges.