Abandoned casts of Angkor Wat treasures come out of hiding 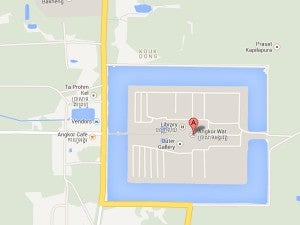 PARIS – Forgotten and abandoned for over 70 years, casts of the art treasures at the Khmer temple complex at Angkor in Cambodia are coming out of storage to be rediscovered in a Europe that first shunned them.

The statues, reliefs and temple decorations in the style of the original ninth to 15-century monuments at the site in northern Cambodia are to be exhibited in Paris’ Musee Guimet in all their splendor.

The casts made between 1870 and the late 1920s were commissioned by Frenchman Louis Delaporte (1842-1925), a member of the expedition team who “rediscovered” Angkor nearly 150 years ago.

Displayed at Paris’ Indochina Museum at Trocadero until its closure in 1936, the works were passed from one storage site to another over the next seven decades, some becoming damaged in the process.

A year ago, the Musee Guimet took the pieces to a secure warehouse where they were inventoried and in certain cases restored, ready for the exhibition entitled “Birth of a Myth. Louis Delaporte and Cambodia” that opens October 16.

Some 250 works will be shown including the casts and original Khmer art plus photographs and drawings.

For several centuries the Angkor complex, now listed as a UNESCO World Heritage Site, was the center of the powerful Khmer Empire.

Delaporte’s collection features reliefs of Angkor Wat with extraordinary detail that far eclipses what visitors to the original can see.

“At the site, the original (reliefs) are high up and barely visible from the ground,” said Pierre Baptiste, exhibition curator and head of the Musee Guimet’s southeast Asia section.

Among the casts is a plaster tower covered with smiling deities, like the one of the Bayon temple, a major monument at Angkor. It was sawed into bits after 1936 but will be partially put back together for the exhibition.

Angkor had already been visited by Europeans including a French naturalist, Henri Mouhot, who wrote of the wonder, before Delaporte joined the 1866-1868 Mekong expedition.

Delaporte was stunned by the sights he discovered and was determined that Europeans see the Khmer art for themselves.

In 1873 he organized a collection of statues, reliefs and architectural pieces found in the temple ruins to be sent to French museums. At the same time, he commissioned the casts.

At first they were ignored by Europe.

“When his 102 boxes of Khmer pieces, including originals, arrived in France in 1874, nobody wanted to know,” said Baptiste. Even the Louvre refused them.

In the end, the works were sent to a chateau north of Paris at Compiegne where Delaporte opened a museum of Khmer art.

Eager to complete his museum collection, Delaporte sent his sculptors to work in Cambodia and produce more casts.

But as the 20th century arrived, interest in casts waned and, after the closure of the Trocadero museum, Delaporte’s collection was homeless.

In 1973, after nearly 40 years, the casts were finally housed in an abbey in northern France but were kept in “dreadful conditions” in humid cellars, said Baptiste.

Finally, in late 2011 the French culture ministry took up the cause, moving the casts into proper storage and treating some for fungus.

It is hoped the casts, at last proudly displayed in a complete exhibition, will seduce a 21st-century public.

The signs are positive: already, people responding to a request by the Musee Guimet for public funds to help restore the cast of a door at Angkor Wat have given thousands of euros.

Nearly 20,000 euros ($26,770) in crowd-funding has also been donated through the MyMajor website, with 10,000 euros more needed to include the door in the exhibition.