Regulate Pot? Uruguay’s been there, with whisky 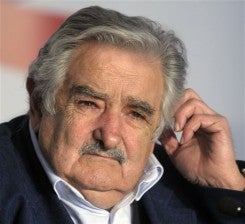 MONTEVIDEO, Uruguay — The government of Uruguay makes Scotch whisky. It also makes and sells rum, vodka and cognac, and has done so for nearly a century. Many people consider this sideline of the state to be an historical accident — a wasteful and even eccentric contradiction.

But President Jose Mujica says Uruguay’s long experience at the center of the nation’s liquor business makes it more than capable of dominating another substance: marijuana.

Final Senate approval of Uruguay’s marijuana law is expected by late September, and the government plans to license growers, sellers and users as quickly as possible thereafter to protect them from criminal drug traffickers, ruling party Sen. Lucia Topolansky, who is also Uruguay’s first lady, told The Associated Press in an interview.

A state entity will license producers and control marijuana’s distribution and sale through the same neighborhood pharmacies that sell prescription medicines and toothpaste. Purchases by licensed users will be limited to 40 grams (1.4 ounces) a month. Pot-growing cooperatives will be encouraged, using government-approved seeds, and people registered with the state will be able to grow up to six plants at home for personal use, as long as they harvest no more than 480 grams (17 ounces) a year.

The project passed the House by just one vote, and while the ruling Broad Front coalition has an easier majority in the Senate, Mujica has been campaigning actively for its passage, reminding Uruguayans that their government has been controlling the market for addictive substances ever since the beginning of the 20th century, when President Jose Batlle y Ordonez wanted the state to monopolize alcohol production.

“Don Jose Batlle y Ordonez had courage,” Mujica said in one of his folksy nationwide radio talks, which sound much like the “fireside chats” that President Franklin Delano Roosevelt used to broadcast to Americans. “The state grabbed it and made a monopoly of alcohol, because it couldn’t stop the booze, and he said “at least don’t poison the people — the booze should be good.”

Batlle y Ordonez was ahead of his time in promoting social change in Latin America, from the separation of church and state to the eight-hour workday and maternity leave. And he had several goals for alcohol: He wanted the whisky to generate government revenues and guarantee a profit stream for farmers, funding the production of a national fuel so that Uruguay’s cars and trucks wouldn’t need imported gasoline.

Uruguay wasn’t alone in that fight: In 1925 Henry Ford was promoting alcohol as the fuel of the future, and it was being blended with gasoline from France to the Philippines. But like many other countries, Uruguay never achieved this energy independence. Oil companies won an intense global campaign to focus on fossil fuels, a trend that held until Brazil started using alcohol blends in the 1980s.

Batlle y Ordonez died in 1929 without seeing his dreams realized, but his spirit as a statesman inspired Uruguay’s congress two years later to create Ancap, a state fuel and hard-liquor monopoly that still refines imported oil and distills liquor at side-by-side plants in Montevideo today.

Ancap’s whisky sales peaked at 332,000 liters (88,000 gallons) a year in 1970, but then it began bleeding money. In 1996, it lost its monopoly on distilled spirits. By 2002, President Jorge Batlle — the grand-nephew of Batlle y Ordonez — decided to create a new, privately administered Ancap subsidiary to manage the state-held company, making it nimble enough to cut costs. Now it has 60 employees and generates nearly $1 million a year in profits, without any state subsidies.

Topolansky agrees that whisky-making is a good model for the marijuana project.

“Back then people were making wood alcohol and other very toxic blends. So the government said ‘the people are going to keep drinking, but we have to offer a quality product, that doesn’t carry dangerous side-effects.’ And the state took over production,” Topolansky explained.

She said they need to do the same with marijuana, which has long been legal to use but not to sell in Uruguay — a situation she said puts people at the mercy of dangerous criminals.

“Marijuana consumers go to dealers where they sell it mixed with more addictive substances, or they sell them something else. It’s a clandestine world where we can’t enter. The state needs to regulate this market, like it did before with alcohol,” she said.

The government says its goal is to lower marijuana consumption in Uruguay by strictly regulating a legal market for it and punishing those who grow, sell or use it illegally.

Controlling alcohol use will help, said Uruguay’s drug czar, Julio Calzada. His agency considers alcohol to be a gateway substance for marijuana, so another bill before Congress would limit beer, wine and liquor advertising, and ban nighttime sales in places other than bars and restaurants. Calzada told the AP that many students in Uruguay drink dangerous quantities of alcohol, and that the numbers are getting worse: in 2006 one of every four had been dangerously intoxicated; by last year, as many as one in every three got seriously ill from alcohol.

But Calzada doesn’t blame the state liquor factory for these behavioral problems. On the contrary: he says it deserves credit for eliminating dangerous brews. “The state was able to drive out those making wood alcohol and poisoning the people, just as Mujica said. Today we have to take action with marijuana because those who buy it don’t know what they’re buying, just the same as what happened with people buying alcohol in 1930.”