Why Napoles was turned over to PNP; charges set vs NBI execs
By: Michael Lim Ubac - @inquirerdotnet
Philippine Daily Inquirer / 03:12 AM September 01, 2013 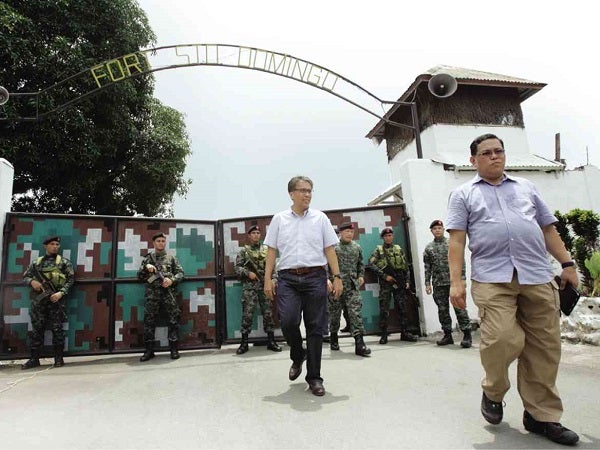 Why did President Benigno Aquino III turn over Janet Lim-Napoles to the police instead of the National Bureau of Investigation, which had been on top of the case from the start?

The NBI, which has been building a case against Napoles and her partners in the alleged channeling of P10 billion in pork barrel to their pockets through ghost projects over the past 10 years, had deployed 12 tracking teams to hunt her down.

But to the consternation of the NBI and Justice Secretary Leila de Lima, Napoles surrendered to the President in Malacañang on Wednesday night. Worse, Mr. Aquino escorted Napoles to the Philippine National Police headquarters in Camp Crame, Quezon City, and turned her over to the Criminal Investigation and Detection Group.

It was reported that Napoles repeatedly said she did not trust the NBI and would surrender only to Mr. Aquino. Napoles would naturally distrust the agency that cracked the case of her pork barrel scam wide open.

To date, the NBI has 10 whistle-blowers against Napoles in its custody. All have submitted affidavits to the NBI detailing how the pork barrel racket worked and benefited Napoles and her alleged accomplices in Congress.

Mr. Aquino on Thursday night shared with the Inquirer the reason for the unexpected turn of events—the NBI has its share of “less trustworthy” officials and agents under Director Nonnatus Rojas.

“There is a very trusted team [in the NBI] building the case,” he said, speaking in an interview with Inquirer editors and reporters after addressing a gathering of Asian newspaper editors in the Inquirer main office in Makati City.

But the trusted team “could not be tasked” to do other sensitive jobs, such as surveillance, Mr. Aquino said.

“They can’t be expected to accomplish all the tasks given [to the bureau],” he said.

De Lima and Rojas have to contend—and sometimes rely on—the “less trustworthy” agents for other missions, as the bureau is severely undermanned, he said.

“[The] NBI is not a peopled agency,” he said, adding that the bureau is stretched thin.

Asked if he was aware that at least two ranking NBI officials have ties to two senators implicated in the misuse of the Priority Development Assistance Fund, Mr. Aquino said: “[Charges] are being prepared [against these NBI officials]. I don’t like [to preempt the filing].”

Mr. Aquino did not name the two NBI officials.

Rumors were rife that the two ranking NBI officials tipped off Napoles to the impending issuance of a warrant for her arrest on Aug. 14, frustrating the agents who had staked out 28 of the known houses of Napoles and her brother, Reynald Lim, to get them that day.

One of the senators had a run-in with police during the recent midterm elections when six confidential NBI agents sought refuge in his house, leading to a confrontation with policemen who were arresting them for violating the gun ban.

An exasperated De Lima faced the media on Aug. 15, saying: “Somebody tipped them off.”

“Didn’t she brag before that she controls the government?” De Lima said, referring to Napoles.

But by fleeing, De Lima said, Napoles and Lim virtually admitted their guilt in the serious illegal detention of Benhur Luy, their cousin and Napoles’ former aide, who had blown the whistle on her alleged racket.

“Flight is deemed an admission of guilt,” De Lima said.

Acknowledging the shortness of the government’s resources, De Lima called on the people to use their power of citizen’s arrest, the case being “imbued with public interest,” and arrest Napoles.

Out of the loop

On Wednesday, Rojas and De Lima appeared to be out of the loop while Interior Secretary Mar Roxas, PNP Director General Alan Purisima and presidential spokesperson Edwin Lacierda prepared for the surrender of Napoles.

Lacierda and members of the communication group, Undersecretaries Manolo Quezon and Abigail Valte, fetched Napoles and her husband, Jimmy, from a cemetery in Taguig.

When they reached Malacañang, other members of the President’s inner circle—Executive Secretary Paquito Ochoa Jr. and Cabinet Secretary Rene Almendras—were on hand to receive the fugitive.

From Malacañang to Camp Crame, it was all too apparent that Roxas was on top of the situation. It was his show.

Where was De Lima all that time?

The President said he informed De Lima about Napoles’ surrender “as soon as we [were informed] that she was with Edwin Lacierda at 9:06 p.m.”

Mr. Aquino said he was not sure whether he called De Lima before that.

“I want to be as truthful as possible,” he said.

Asked if De Lima was “happy” with the turn of events, Mr. Aquino said: “We talked. She told me that the media were contacting her till 3 a.m. [on Thursday].”

Kapunan did all the talking

Mr. Aquino said he did not ask Napoles how she had managed to elude the 12 tracking teams of the NBI.

During the 10-minute meeting in Malacañang, Napoles barely said anything, Mr. Aquino said. It was her lawyer, Lorna Kapunan, who did all the talking, he said.

Quezon, who was present at the meeting, said Kapunan delivered a “speech,” flatly denying the report that Napoles had three luxury yachts, a helicopter or a submarine.

“Our interest—wherever you came from—is for you to be in [government] custody, so that the [legal] process could start,” the President said.

“At the end of the day, the interest [of the administration] was to secure her person and get her into custody [so that she will] not [be added to the list of those] we’re still going after,” he said, referring to high-profile suspects who have been successful so far in eluding arrest: former Army Maj. Gen. Jovito Palparan, former Palawan Gov. Joel Reyes and his brother, former Coron Mayor Mario Reyes, former Dinagat Island Rep. Ruben Ecleo Jr. and property developer Delfin Lee.

Mr. Aquino said he decided to receive Napoles because she insisted that she “surrender to me first, that she talk to me first.”

What’s the first thing she told him?

Did he shake hands with Napoles?

“No,” the President said emphatically, and quickly added, “[Do we need to discuss] trivial things?”

But he continued: “She sported long hair [though] her pictures showed she had short hair.”

The President said he had told Napoles, “Finally, [the case] is now in the court, so you have the opportunity to ventilate your side.”

“It’s good you finally surrendered—I don’t think I said it that way,” he said.

A Palace official who was present at the meeting said Kapunan complained that the NBI was biased against Napoles.

“They don’t trust the NBI,” said the official, who asked not to be identified because he was not authorized to talk about what happened during the meeting.

“The President told them that ‘she can now defend herself in court, answer the charges. It’s liberating’” to be able to face the music, the official said.

Told about a claim that Napoles was already in the custody of the administration as early as Tuesday, Mr. Aquino said, “Not true.”

Asked whether there was truth to the allegation that Senate President Franklin Drilon was close to Napoles, Mr. Aquino said, “He never mentioned that to me.”

Did Napoles mention a “red book” detailing her transactions with lawmakers?

The President scotched speculation that he had struck a deal with Napoles.

Napoles is reportedly hypertensive and has diabetes but she did not ask to be held in a hospital, the President said.

Unlike former President and now Pampanga Rep. Gloria Macapagal-Arroyo, who is held in a military hospital on graft and electoral sabotage charges, Napoles did not ask for special accommodation, Mr. Aquino said.

“Preference for detention? She will be moved tonight (Thursday),” he said, referring to the court order handed down that night to transfer Napoles to Makati City Jail.

Late on Friday, the court issued an order for the transfer of Napoles to Fort Sto. Domingo in Sta. Rosa town, Laguna province, after Makati City Jail admitted that it could not guarantee the safety of Napoles.