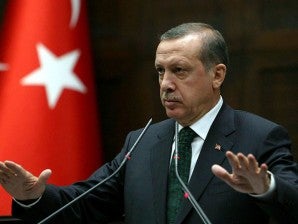 ANKARA—Turkey’s prime minister said Friday that the limited strikes threatened by the United States against Syria were not enough and pushed for a broader military offensive that would topple the regime.

“A limited operation cannot be satisfactory for us,” Recep Tayyip Erdogan was quoted as saying by the NTV news channel.

“An intervention akin to that decided for Kosovo must be launched. An operation of one or two days will not be enough. The goal should be to force the regime out,” he said.

US President Barack Obama said Friday that his administration and the military were looking at a “wide range of options” in Syria but had ruled out “boots on the ground” or a “long-term campaign”.

“We are looking at the possibility of a limited, narrow act,” he said.

Erdogan, whose country shares a long border with Syria, was once an ally of Syrian President Bashar al-Assad but is now one of his fiercest critics.