Signal No. 3 up in Isabela, Cagayan and Northern Aurora 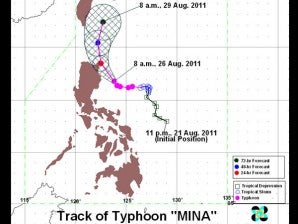 MANILA, Philippines—Signal number 3 has been raised over several provinces even as typhoon Mina (international name: NANMADOL) maintained its strength as it continued to move westward, the Philippine Atmospheric, Geophysical and Astronomical Services Administration (Pagasa) said.

In its latest weather bulletin, Pagasa said that Mina was seen, as of 10 pm at 190 km east of Casiguran, Aurora and was still packing maximum sustained winds of 140 kilometers per hour near the center and gusts of up to 10- kph. Mina was forecast to move westward at 13 kph, Pagasa said.

Mina was expected to enhance the southwest monsoon and bring rains to parts of Southern Luzon and Visayas, Pagasa said.

“Estimated rainfall amount is from 15-25 mm per hour within the 500 km diameter of the typhoon,” Pagasa said.

Residents in low lying and mountainous areas having storm signals, and sections of Southern Luzon and Visayas experiencing monsoon rains have been warned to take precaution against possible flash floods and landslides. Likewise, those living along coastal areas were alerted against storm surges, which may be generated by the typhoon, the state-run weather bureau said.