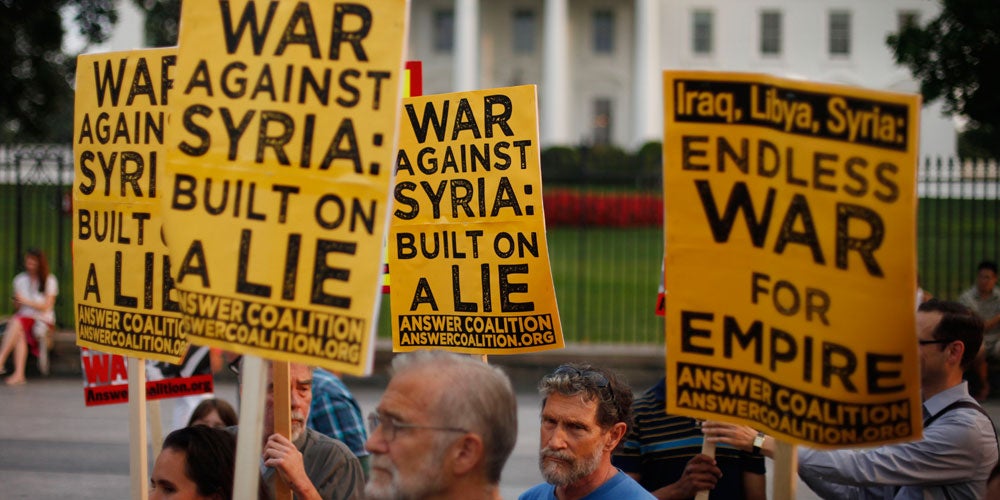 NEW YORK CITY – Hundreds of people protested at New York’s Times Square on Thursday over possible US plans to strike Syria’s regime which it believes to be behind a deadly chemical attack.

Supporters of Syrian strongman Bashar al-Assad, backers of the opposition who want a US intervention, and Americans who say they can’t stomach another war all took to the iconic Manhattan Square.

“US, NATO, hands off Syria,” chanted hundreds of protesters, weaving through thousands of tourists, some carrying pictures of Assad, and some just declaring themselves against another US war.

Khaldon Makhoul, 43, a physician who moved from Syria to America 17 years ago, held a sign reading: “Syria=Iraq. Same Lies.”

Others, Syrians of Christian origin, carrying the country’s red-black-white flag, defended Assad and wrote off the accusations he was behind a deadly chemical attack last week as utter lies.

Retired school teacher Robert Shainwald said he was against any US involvement.

“I do not want this nation to become involved in yet another war. People always lose, no matter what side. Enough is enough. We should just stay the hell out.”

Away from the protesters, as tourists posed with Disney characters under the glare of massive screens, Jose Martinez, dressed as Spiderman, gave his view.

“I believe this is stupid. People killing people for no reason. The US is supposed to go (ahead with the strike). Just go, don’t even think about it. People are dying there, they don’t have the power to stop it.”

One street down a handful of backers of the Syrian opposition carried the black and green flag chanting: “Assad is a terrorist. Assad is Hitler.”

Occasionally as the other protesters walked past they traded angry insults, with police stationed watchfully between them.

Nezar Yabroudi, a driver originally from Damascus held up a sign carrying images of hundreds of dead children from the chemical attack.

“Mr President do you need more proof?” it read.

“People are dying everyday. How many massacres we have to wait, how many red lines?” Yabroudi told AFP referring to President Barack Obama’s promise last year that the use of chemical weapons would be a “red line.”