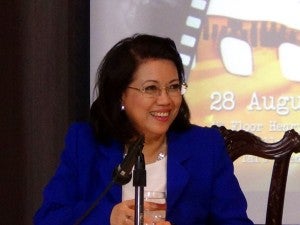 MANILA, Philippines—Marking a first year in office was too important a milestone the “dignified silence” policy just had to give way, at least for the time it took to give a press conference.

Still, Chief Justice Ma. Lourdes Sereno insisted that taking questions from the media for three hours was not a departure from “dignified silence,” the edict she handed down on her first day in office where, she said, justices would not be heard speaking, except through their resolutions and decisions.

So a year into her 18-year reign, Sereno said all was well between her and the other high court justices, some of whom were bypassed when President Aquino chose her, at 52 the youngest and the first woman so chosen, to head the judiciary.

And she was “really” independent from the President who appointed her, she insisted.

Bragging that the high court was able to pass many important reform measures like the “efficient paper rule” and the “judicial affidavit rule” designed to speed up judicial processes, Sereno said that would not have been possible if relations with the other justices were not good.

“I tell you if our working relationship is not good, how could we have achieved these historic landmarks?” she said.

“How could I have discussions with them on the future of the Supreme Court building if we are not able to work with each other?” she added.

“What I see right now are good working professional relationships,” she said of her relations with the other justices, which were rumored to have been rocky at the start.

And even if she owes her position and long, 18-year tenure to President Aquino, Sereno insisted that she was “really independent,” and wondered how she could prove it to the public.

She said the President has not made any move to ask her to vote for something that would favor his office.

Look at “my voting pattern,” she said. She said she even “broke ranks” with the ruling Liberal Party on two occasions.

But when it came to the hot topic of the day, the congressional pork barrel scandal, Sereno retreated into “dignified silence,” declining to comment because she said the cases involving the pork barrel would reach the high court.

Indeed, the Social Justice Society of losing senatorial candidate Samson Alcantara has filed the first case against the pork barrel before the high court, seeking to stop lawmakers from enacting a law appropriating funds to the Priority Development Assistance Fund.

As to the jucidiary’s own discretionary funds, Sereno said there was no pork barrel in the judiciary.

She said “every single centavo” in the judiciary was fully audited, even the Judicial Development Fund which provides the salaries of justices and judges.

“We cannot escape the Commission on Audit accounting,” Sereno said.

In fact, she said the judiciary did not have enough funds for its maintenance and other operational expenses (MOOE).