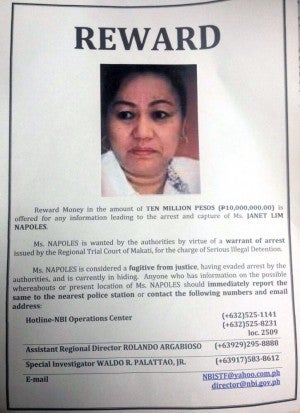 July 12 – The Inquirer published the first of a 6-part series on the investigation of the NBI on an alleged P10-B pork barrel scam. The story was based on the affidavit of Benhur Lim-Luy, who was rescued by the NBI from the condo of Janet Lim-Napoles. Luy said Napoles was the brains behind a massive siphoning.

July 13 –Napoles denied Luy’s allegations. In her counter-affidavit, she said, “I am not involved in any scam.”

July 16 – Inquirer reported that at  P900 million from royalties in the operation of the Malampaya gas project off Palawan province intended for agrarian reform beneficiaries were siphoned off by dummy nongovernment organization (NGO) created by Napoles.

August 8  – Napoles  had a roundtable discussion with Inquirer editors, columnists and reporters  at the Inquirer main office in Makati.
August 14 – Court issues warrant of arrest for Napoles, and her brother, Reynald ‘Jojo’ Lim for the illegal detention of Luy. Napoles and her brother disappeared.

August 26 — Angry netizens and ordinary citizens gathered at the Luneta for the ‘Million People March’ protest. They called for President Aquino to abolish the pork barrel.

August 28 – President Aquino announced a P10M reward for any information that would lead to the arrest of Napoles.

Hunt on for 3 Napoles yachts

Read Next
3rd testimony: Sulpicio on wrong lane
EDITORS' PICK
What to watch out for when selecting a video surveillance solution
Heads may roll at BOC, says Palace if sugar smugglers are allowed to use recycled import permits
vivo brings to the Philippines a powerful smartphone with a slimmer body, the vivo Y02s for only PHP 6,499
Palace: Biggest supermarkets in PH commit to sell sugar at P70 per kilo
DOH reports increase in daily COVID-19 deaths, mostly unvaxxed
House energy committee chair Arroyo bats for cheap electricity
MOST READ
DepEd to give teachers P5K cash allowance within first week of classes
Alyssa Valdez to miss Creamline’s AVC Cup campaign
Jordan Clarkson arrives in Manila to bolster Gilas Pilipinas
NIA welcomes former DENR exec as its full-fledged administrator
Don't miss out on the latest news and information.