From Bikol poetry to filmmaking 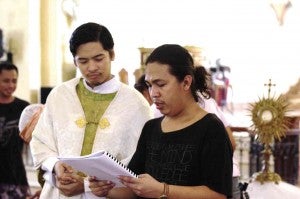 He has an array of poetry books, fiction and literary translations to his name, as well as two Palanca Awards and other literary awards when he was still in his 20s.

At 30, Kristian Sendon Cordero seeks to reinvent himself as he breaks ground in the field of filmmaking, courtesy of Cinema One, a subsidiary of the ABS-CBN Network dedicated to showing Filipino movies.

Cordero is among the 10 amateur filmmakers who made it to the finals of the category Cinema One Currents in the 2013 competition targeted to be screened in Manila sometime in November.

He received P1 million to finish a full-length feature film, which tackles the absolute power of the Catholic Church over the converts among the indigenous people of Mt. Asog called the Agta.

Cordero titled his film “Angustia,” which means deep anguish or intense sorrow arising from the relationship of the film’s characters—a secular priest, an Agta couple and a babaylan (native priest) in the 1800s in Bicol.

Working on a shoestring budget, Cordero has been undaunted by the task of finishing a period film about Bicol. The story happened more than two centuries ago and required costumes and locations simulating the ways during the Spanish colonial era.

He said he was thankful for support from friends in the academe and literary circles, which spared him from spending for talent fees, exterior and interior locations, and accommodations.

In San Jose town in Camarines Sur, where Cordero shot scenes for two days, the parish priest was generous enough to allow them use of the baroque church built in 1816, pastoral center and seminary, and bahay na bato (stone house) of the Patrocinio family.

This generosity saved him a lot of money, which could have been charged from the film’s budget.

“I am happy friends are helping me. That’s a lot of savings because I’ve heard some filmmakers have to shell out P100,000 per day for the use of the church alone and P50,000 per day for use of a private house as location,” he said.

Cordero, a former seminarian, said the locations were for free and all they needed was to extend courtesy and coordinate with the priests and bishop.

He was delighted that Msgr. Luis Jonie Aguirre, a parish priest of San Jose, allowed him to shoot inside the church even though the film material talked about a priest engulfed in paranoia that dragged him to intense sorrow.

Cordero tapped actor Alex Medina and actress Maria Isabel Lopez to take major roles in the film. Cameo roles were performed by nonactor friends and volunteers who breathed life to his narrative about power, subjugation and exploitation.

The church was special, he said, describing it as one of the most beautifully preserved baroque churches in Camarines Sur during the colonial period.

It is also the burial site of a rich forlorn girl who was strangled by her fiancé because she declined to be wed, Cordero said.

One of the scenes show a lead character, an Agta maiden, kneeling before the tomb on the wall inside the church where the remains of a certain Delfina Bilbao were kept. An inscription on the tomb said Bilbao died on June 24, 1905, at the age of “18 años, 7 meses 16 dias (18 years, 7 months 16 days).”

Details of the tombstone show the bas relief of a young girl whose long braided hair rests on a pillow as she lay in a curtained deathbed. A closer look at her face shows a strip of cloth running from the jaw to the head as if to keep her mouth from being wide open.

Cordero said Bilbao’s tale somehow found its way in the scenes in “Angustia.”

Other scenes were inspired by a Marian devotion traced back to a miracle that was said to have happened on a hill called Inorogan at the foot of Mt. Asog in 1641 when the volcano acted up.

“I want to see my film as an ode to loneliness. I like to believe that I can translate my poetry in my film,” he said.

Better known as a poet, Cordero has earned raves from personalities in the Philippine literary circle for his published books.

Marne Kilates, poet and translator, described Cordero as “the enfant terrible of Bikol poetry. His deep thought on things ordinary and extraordinary constantly stretches the possibilities of the language.”

“One of Kristian’s most exciting contributions to Bikol and Filipino literature are his poetic production not only in Filipino and the regional lingua franca of Naga-Bikol but also in the native Rinconada (dialect of the fifth district of Camarines Sur), churning such gems as Upus, Dapla and Kamgum,” said Paz Verdades Santos, a book author and editor and retired professor of literature at De La Salle University who is presently teaching at Ateneo de Naga University.

By writing literature in Bikol of Iriga and environs, he has helped preserve this variety of Bikol for posterity, she said.