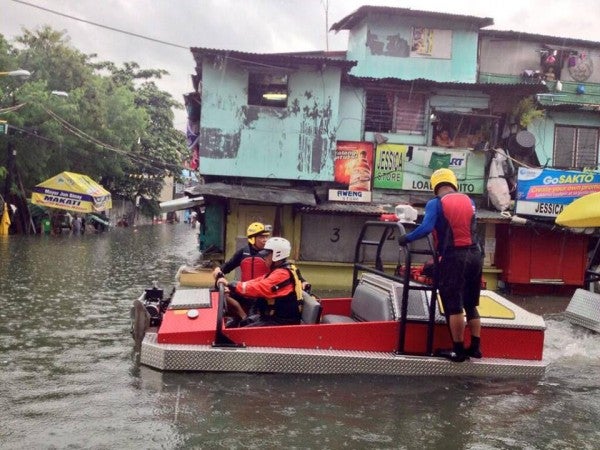 MANILA, Philippines — The city government of Makati announced on Wednesday its plans to hire weather and flood experts and acquire amphibian trucks and even a helicopter to boost its disaster response.

Makati Mayor Jejomar Erwin Binay Jr. disclosed this to members of the Makati Disaster Risk Reduction and Management Council, stressing that these initiatives would be among their priorities in their efforts to promote the city’s disaster resiliency.

The local disaster response council was convened on Tuesday to assess the impact of the monsoon rains enhanced by typhoon “Maring,” which dumped a month’s worth of rain in Metro Manila last week.

Almost half of the metropolis was paralyzed by the flooding.

“We want to further strengthen our warning system by tapping experts who could interpret various weather data, such as that provided by Pagasa or Manila Observatory,” Binay said in a statement.

At present, there are seven Weatherlink Stations strategically installed in different areas in Makati. Manila Observatory, a private research institution, is its partner in collating and interpreting data from the stations to establish a pattern related to flooding in the city.

Binay said he would designate one city officer who would solely focus on flooding, flood problems and flood mitigation.

“Flooding is a perennial problem and we already know the areas that usually flood.  In fact, we have complete details of areas and streets that flood in our flood hazard maps. An officer whose function is dedicated to these concerns would greatly reduce our vulnerability in terms of flooding,” he said.

The mayor also cited the growing need for a helicopter especially for rescue operations in areas that cannot be accessed by land vehicles.

Each barangay (village) should likewise have an amphibian truck to help rescue teams in evacuating and rescuing residents during flooding.

Last week, at the height of the monsoon rains, Mayor Binay and his father Vice President Jejomar Binay were seen riding HydraTek, an amphibious vehicle on loan for testing, as they led the rescue operations in the flooded Makati villages.

While relay of information during typhoons and flooding among concerned units has been effective, Binay enjoined the barangay officials to be vigilant in informing the Makati Command Control and Communication (C3) Center of the latest status and updates so that the latter could properly allocate the resources available, such as the first responders or vehicles to be deployed.

The Makati Social Welfare Department said 1,131 families in Makati were affected by the recent flooding caused by storm Maring and the monsoon rains.

Out of that number, 878 families or 3,349 individuals were evacuated to various evacuation centers around the city, where MSWD personnel provided round-the-clock assistance. The MSWD distributed relief goods, mats and blankets to the affected families.

In the coming months, the Department of Engineering and Public Works (DEPW) of Makati will be implementing the Drainage Masterplan aimed at improving the drainage system in the city and solve its perennial flooding woes.

It has already completed its Makati Disaster Risk Reduction and Management Plan 2013-2019, and is now finalizing its Flood Contingency Plan and Earthquake Contingency Plan.

Its risk-sensitive Comprehensive Land Use Plan (CLUP) and Zoning Ordinance (ZO) 2013-2023 were granted the Certificate of Approval by the Housing and Land Use Regulatory Board last June 28, 2013.