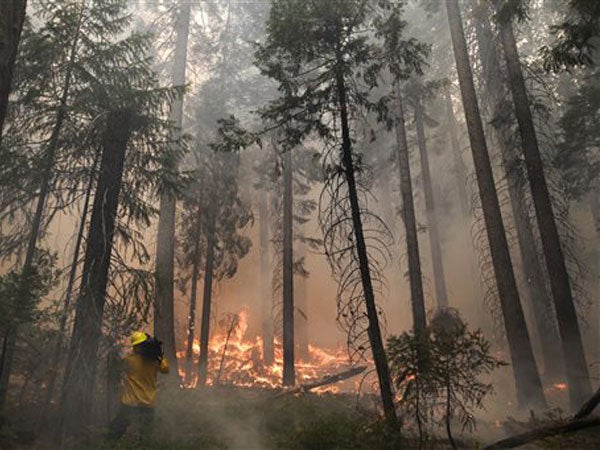 A main road into Yosemite, one of America’s top tourist destinations, remains closed as more than 3,700 firefighters battle the flames.

“It’s burning its way into the record books,” Daniel Berlant, a spokesman for the California Department of Forestry and Fire Protection, or Cal Fire, told the Los Angeles Times.

The blaze has forced the closure of multiple roads, campgrounds and other facilities in the area, and has also threatened a number of groves of giant sequoia trees, some of the biggest and oldest living organisms on the planet.

It remains more than 15 miles away from the majestic Yosemite Valley area at the heart of the park, visited by millions of tourists every year to see natural wonders including the Half Dome and El Capitan rock formations.

But ash from the inferno has reached the reservoir that supplies San Francisco’s drinking water.

The Hetch Hetchy Reservoir is the main source of fresh water for 2.6 million people living in the San Francisco Bay Area, located some 200 miles (320 kilometers) to the west.

“Water quality is not currently impacted by the Rim Fire,” the San Francisco Public Utilities Commission said in the latest update on its website.

“We are monitoring water quality every minute of each day to ensure its quality and safety.”

The fire is also threatening the iconic giant sequoia trees in Yosemite.

“They are definitely in danger, but we’re doing everything we can,” US Forest Service spokesman Lee Bentley told CNN when asked about the trees.

Bentley said firefighters had “a pretty good chance of keeping it away… But it’s going to take a heck of a lot of work and a lot of air power.”

Schools in several nearby areas were expected to stay closed Tuesday.

No injuries or deaths have been reported due to the blaze, but it has destroyed at least 111 structures – including 31 homes as well as buildings on camp grounds that were hastily evacuated last week when the fire erupted.

More than 5,500 buildings, including 4,500 homes, remain under threat, according to Cal Fire.

Growth potential of the fire, and terrain difficulty were both still described as “extreme” by the Inciweb update.

But the park stressed on its website Tuesday that “most of Yosemite National Park is not affected by the fire and is relatively smoke-free. The northern part of the park… has some smoke. Conditions may change if winds shift.”

Highway 120, one of the main routes into Yosemite from the west, was closed due to the fire.

Governor Jerry Brown declared a state of emergency last week for San Francisco due to the threat to its water and even power supplies.

Two hydroelectric power plants have not been in use since August 19 due to the fire, the San Francisco Public Utilities Commission said on its website.

President Barack Obama spoke to California’s governor on Sunday and “expressed his gratitude for the brave men and women working tirelessly to combat this devastating fire.”