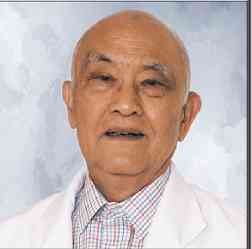 FILIPINO RAMON MAGSAYSAY AWARDEE National Scientist Dr. Ernesto O. Domingo says a medical doctor has to empathize with his or her patient, stressing that this “ is not negotiable.”

Exposed to all sorts of pain and illnesses, doctors typically grow desensitized to human suffering, often regarding patients as just another number on the bed.

Not Dr. Ernesto O. Domingo, a national scientist and professor emeritus at the University of the Philippines College of Medicine, who would admonish students if ever they made the mistake of looking at patients as faceless and nameless strangers.

“Medicine is not just about curing illness,” said the 77-year-old Domingo, whose mission in his retirement years is to achieve universal healthcare for Filipinos after decades of juggling university administration duty and ground-breaking research on liver disease.

For his contributions to medical science and his advocacy for the well-being of the Filipino, Domingo will receive the Ramon Magsaysay Award, one of Asia’s most prestigious honors and sometimes described as its version of the Nobel Prize.

“I always say it’s not good not to feel the pain [of the patients]. I do not subscribe to the view that you treat them impersonally and you shouldn’t be affected. You should be affected,” he told the Inquirer.

“That’s not negotiable—you have to feel for your patient. When they’re dying, don’t abandon them just because you feel awkward being there. Be there if you can,” Domingo said in an interview at his clinic in Medical Center Manila ahead of the Ramon Magsaysay Award presentation ceremony on Aug. 31.

The practice of medicine, he said, is “about empathy, feeling like your patient…. Once you lose that, I think you lose an aspect of your being a physician.”

Domingo admitted that he had wept “many times” for dying patients, “but I don’t show it.”

“We should not be callous to their feelings. My mentors taught me that,” he said.

Domingo’s empathy is reflected in his social consciousness.

At a recent family dinner, he told his daughter Angela Salvana, the only one of his four children to follow in his footsteps, that once universal healthcare is fully implemented, private physicians would have no choice but to participate.

His daughter jokingly replied: “That’s because you’re a socialist.”

“I said, ‘I don’t care which label it is. If that’s socialism, then so be it,’” Domingo said with a laugh.

He finished medicine at UP in 1961 and furthered his specialization in hepatology and gastroenterology at teaching hospitals in the United States, among them, Case Western Reserve University in Cleveland, Ohio.

Before he retired in 2001, he devoted over four decades to UP Manila (UPM) as researcher, teacher, chancellor and university professor emeritus.

Although university work was fulfilling, Domingo said it came at a considerable personal cost. “I did not build a big practice … I never became a big-time practitioner with plenty of patients,” he said.

“I’m not complaining, but modesty aside, I would have made so much more money if I  chose to do so. I didn’t do too badly. I’m not poor. I got enough. In fact, compared to the average Filipino, I got more than enough. I’m not deprived. But what I’m saying is, you have to give up something,” Domingo said.

When he retired from UP after more than 40 years of service, he received a lump-sum payout of P1.8 million. By contrast, a colleague of his who was working for a pharmaceutical giant was given a retirement package amounting to P30 million.

“I felt some self-pity that after 40 years this was all I’m getting. But there are other benefits,” Domingo said.

Some of those benefits included playing a great role in the understanding of liver disease, his specialization. At the university, Domingo organized the UPM Liver Study Group and led in cutting-edge studies of viral hepatitis and liver disease, which established the connection between chronic hepatitis B and liver cancer.

His research found a solution to liver cancer and hepatitis, determining that immunizing newborns against hepatitis B within 24 hours from birth could reduce the probability of acquiring hepatitis by 95 percent.

“His research has saved millions of people from the danger of life-threatening illness, and reduced health-care costs,” according to the Ramon Magsaysay Award Foundation.

He has also pushed for hepatitis vaccination to be mandatory and available to all, and worked closely with legislators and successfully lobbied for a law that ensures annual budgetary support for neonatal hepatitis immunization.

“From ground-breaking scientific discovery to policy advocacy and securing implementation resources, he has painstakingly demonstrated how medical science can truly protect and promote the quality of life of everyone, especially the poor,” it said.

Upon his retirement from UP, Domingo began to get busy with private practice at Manila Med, but his public health advocacy continued.

In 2008, Domingo, along with a number of colleagues, founded the Universal Health Care (UHC) Study Group in the hope of advancing, through research and advocacy, universal healthcare in the Philippines.

The group produced a “Blueprint for Universal Health Care” and actively campaigned for its adoption when the Aquino administration assumed power in 2010.

“I have only one dream left—that eventually we will be able to fully implement universal healthcare. That should be our dream, all of us,” he said.

Domingo said he envied the healthcare system in Canada, some Scandinavian countries, and Britain, “where if you get ill, you get to the best hospital, best doctor, best treatment, without worrying about the fee.”

“You cannot do that here. [Sometimes], you don’t even get near a doctor. I hope that happens soon,” he said.

Thanks in a large part to his efforts, the Department of Health’s budget “has doubled in three years, some 80 percent of the population is now enrolled in the national health insurance program, and public health-care delivery capacities are being upgraded,” the foundation said.

“Medicine is basically a social science,” Domingo was quoted as saying in the foundation’s profile of him. “When you deal with families and communities, it cannot be anything else.”

He said social awareness and sensitivity were important in the administration of public health.

“In public health, the problem is you think of illness as though it were disembodied. When you talk about HIV [human immunodeficiency virus] as a public health officer, on top of your mind would be the statistics, the faceless victims,” Domingo told the Inquirer.

“Have you ever seen an HIV patient at the height of his illness, with all the infections? Do you know what it is to have a disease like that? So when you talk of HIV, keep in mind that you’re not talking of abstract people. These are people who are very sick, and many times you cannot even help them,” he said.

He recalled how some of his mentors at university were particular about showing respect to patients. “You should not be rude. Just because one is a charity patient, you cannot just plop down on his bed,” he said.

An old professor of his, he said, would “fly into a rage” if a doctor or medical student made the mistake of sitting on the patient’s bed. “He’d say, ‘That is his territory. You have no right invading his territory. If you want to do so, ask his permission,’” Domingo said.

The National Academy of Science and Technology conferred on him the title of National Scientist in 2010, the same year the UP Alumni Association presented him with a Lifetime Achievement Award.

Domingo is married to Carmelita Fagela, a pediatrician, with whom he has three sons and a daughter.

In giving Domingo the Ramon Magsaysay Award, the board of trustees “recognizes his exemplary embrace of the social mission of his medical science and profession, his steadfast leadership in pursuing ‘health for all’ as a shared moral responsibility of all sectors, and his ground-breaking and successful advocacy for neonatal hepatitis vaccination, thereby saving millions of lives in the Philippines.”

Since its inception, the foundation has named laureates 281 people and 20 organizations. The highest number of individual laureates comes from India with 51, followed by the Philippines with 44, and Japan with 24.

Through an endowment from the Rockefeller Brothers Fund, the award was created in 1957, the year the beloved Philippine president after whom the award was named died in a plane crash.

By a stroke of serendipity, one of Domingo’s most vivid memories of high school was shaking hands with Magsaysay, then the defense minister and the commencement speaker during his graduation in 1953 at National Teachers College in Malabon City.

“I have seen him, I have heard him talk. I have seen what he did. He’s a real hero,” he said of Magsaysay.

Domingo had no inkling that some 60 years later, he would be the recipient of the award honoring the memory of his hero. When he was first told he was to receive the Ramon Magsaysay Award, he reacted with disbelief—and suspicion.

“I was sitting here in my office. The phone rang. I said, ‘Hello? Who’s this, please? ‘This is Carmencita Abella of the Ramon Magsaysay Foundation.’ ‘Oh yes, what can I do for you?’ ‘Sir, you were chosen by the foundation to receive the Ramon Magsaysay Award.’”

Domingo’s skepticism faded when Abella, the president and chief executive officer of the foundation, laid down instructions and details on what he was to do before he was officially recognized as a Ramon Magsaysay laureate.

“When she said, ‘I will send somebody there with the official documents, and I’d like you not to announce this because this will come out on the 25th of the month,’ and she said, ‘Don’t tell it to anybody. You may tell your wife, but tell her not to say a word ….’ I thought to myself, ‘This is the real deal,’” he said.

But he recalled sounding unenthusiastic and having reservations about accepting the award, as he knew that other people were doing work that was just as important and relevant as his.

Abella would tell him later that his reaction was not unique among the Ramon Magsaysay laureates.

“She said the majority of our awardees are like that. In fact, many of them said, ‘Is that why you are giving me the award? But it’s just work.’ Which is the truth,” Domingo said.