Hunt on for 3 Napoles yachts 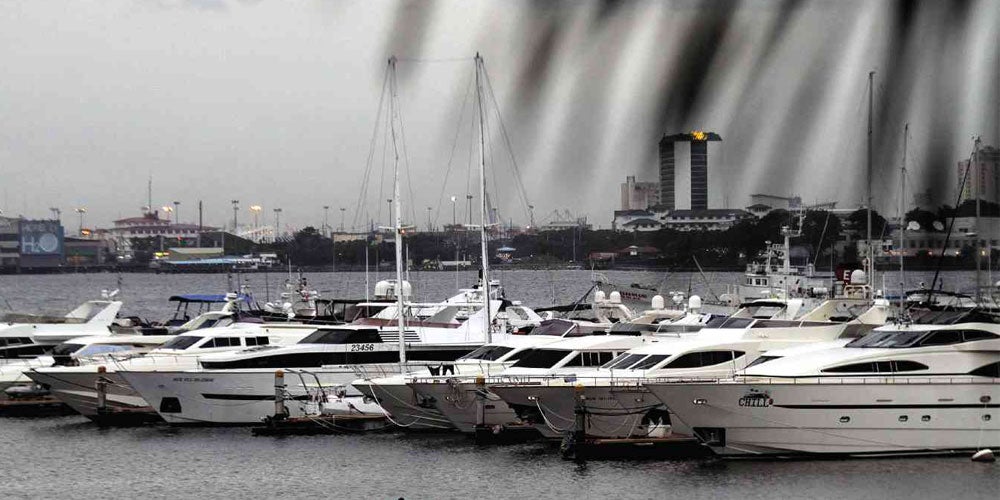 SOMEWHERE BEYOND THE SEA. Government forces are monitoring the seas between Mindanao and Indonesia for three luxury yachts reportedly owned by fugitive businesswoman Janet Lim-Napoles. Photo shows private yachts docked at the Manila Yacht Club, which NBI agents visited on Aug. 16 in search of Napoles. They were initially barred from searching the club’s premises until the NBI agents flashed arrest warrants for Napoles and her brother. JOAN BONDOC

Is Janet Lim-Napoles sailing on to Neverland?

The Bureau of Immigration on Tuesday said it was closely monitoring, with the help of the Philippine Coast Guard (PCG), islands near Mindanao and Indonesia for three luxury yachts that might have been used by the fugitive businesswoman allegedly behind a P10-billion pork barrel scam to leave the country.

“We were given information that Mrs. Napoles has three yachts docked at the Manila Yacht Club but now they are no longer there,” Immigration Commissioner Siegfred Mison told reporters. “We already alerted authorities stationed at all the possible routes the boats may take.”

But Justice Secretary Leila de Lima told reporters Tuesday she believed that the siblings were still in the country.

“All existing leads gathered by the National Bureau of Investigation point to the fact that they’re still here but they’re hiding,” she said.

The vessels reportedly vanished shortly after arrest warrants were issued on Aug. 14 against Napoles and her brother Reynald in connection with the alleged kidnapping of Benhur Luy, her cousin and aide who has turned whistle-blower.

Mison said that if Napoles indeed used the sailboats to flee the country, she might pass through Bongao in Tawi-Tawi to Malaysia or Balut Island south of the tip of Davao del Sur just three hours away from Indonesia.

Napoles told the Inquirer during a roundtable discussion earlier this month that she was an investor in a coal mining company in Indonesia but she could not name the company and her Indonesian principal.

Mison, officer in charge of the bureau, said his office had coordinated with its counterpart in Indonesia for the possible entry of Napoles using such route. Photographs of Napoles and her brother have also been sent to authorities on Marore Island, an islet bordering the Philippines and Indonesia.

But Mison remained positive that Napoles and her brother were still in the country.

“They can escape to Hong Kong but not in this weather,” he said.

Mison also disclosed that the bureau had also requested the Civil Aviation Authority of the Philippines (CAAP) access to private hangars as Napoles might try to flee the country using a private plane.

“Only the CAAP has access to these private hangars… they might want to consider giving us access or they could be vigilant and try to find out who are the persons on board every time a private plane leaves for a foreign destination,” Mison said.

Cmdr. Armand Balilo, PCG spokesman, said PCG personnel were on the lookout for Napoles but that there had been no sighting of the businesswoman or her brother.

An NBI official who declined to be named said agents had checked out leads that Napoles and her brother had escaped using their boats. “It was raw information that we pursued and it turned out negative,” the official said.

A team from the NBI Anti-Organized Crime Division in the afternoon of Aug. 16 rushed to the Manila Yacht Club when told by an informant that Napoles was in the area.

The club management initially refused to allow the NBI to search the premises but relented after the arrest warrants were shown. However, the boats were no longer there.

“Although we pursued good leads, the bureau does not have the manpower to look into all of them,” the official said. “Since confidential agents have been disallowed, line agents have to work on several cases at a time and hampered the pursuit of other cases.”

“We have stretched ourselves thin because we also have other equally important cases,” the official said. “Selected confidential agents  serve as force multipliers of the bureau particularly in cases like this.”—With reports from Christine O. Avendaño and Tina G. Santos