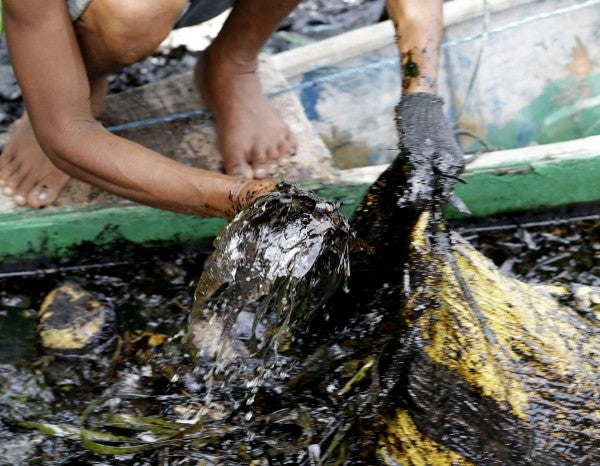 A village official cleans the mangrove swamp off of an oil slick that affected about a dozen coastal villages in Cordova, Cebu city, central Philippines. On Aug. 19, 2013 the passenger ferry MV Thomas Aquinas and the cargo ship Sulpicio Express Siete collided off Talisay city that discharged oil from the ferry and reached the coastal villages of Cebu. (AP Photo/Bullit Marquez)

MANILA, Philippines — Authorities on Tuesday studied ways to remove a sunken ferry that threatens to leak more fuel into a busy waterway as the death toll from the disaster rose further.

The St. Thomas Aquinas ferry may be either refloated, cut up for salvage or dragged into deeper water away from the busy shipping channel off the central island of Cebu, said provincial civil defense chief Neil Sanchez.

These were the options presented by a salvage team hired by 2Go Travel, the ferry’s operator which is also investigating ways to syphon out the fuel still inside the vessel to prevent further leaks from polluting the area, said Sanchez.

“They will suck out the fuel, then refloat it or cut it up, or drag it into a deeper portion of the ocean,” he said.

But Sanchez said operations could not begin until government divers had removed numerous bodies still inside the ferry, which sank on August 16 after colliding with a cargo ship.

The divers had seen about 30 corpses where the tourist section, the cabins and cafeteria are located, he said.

So far, 82 bodies have been recovered but the coastguard has raised the number of missing to 55 after re-checking figures, Sanchez said.

Retrieval of the bodies from the ship, lying on the seabed about 30 meters (98 feet) deep, has been hampered by rough seas and debris blocking the divers’ way.

Some of the 120,000 liters (32,000 gallons) of bunker fuel the ship was carrying has already spilt, polluting mangrove sanctuaries, fishing grounds and beach resorts.

Divers have plugged the leak and 2Go Travel has hired fishermen affected by the spill to help clean up the oil, said Sanchez.

Ferries are one of the main forms of transport across the Philippine archipelago of more than 7,100 islands, particularly for the millions who cannot afford to fly.

But sea accidents are common, with poor safety standards and lax enforcement typically to blame.

Read Next
Easement violators in Boracay have until Aug. 28 to dismantle structures
EDITORS' PICK
Nestlé Philippines’ ‘NESCAFÉ Plan’ bags Grand Anvil at PRSP 56th Anvil Awards
Smart reinforces superiority with best speed and mobile video experience in PH
Every Filipino home can now be a smart home with realme TechLife
New 3,045 COVID-19 cases push PH total active cases to 40,074
LTO’s P500-M deal for screws draws scrutiny
How to lose a PH genius: Wesley So officially a US citizen
MOST READ
How to lose a Filipino genius: Wesley So officially a US citizen
US lays out list of aid to ‘satisfy’ Duterte following VFA payment demand
Robredo on Sara Duterte leading poll surveys: Why are Filipinos drawn to leadership of this kind?
Rights lawyer survives attack by playing dead, loses all case files
Don't miss out on the latest news and information.