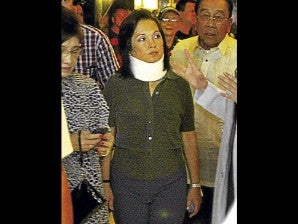 MANILA, Philippines – Former president and now Pampanga Representative Gloria Macapagal-Arroyo’s operation on her cervical spine “went well” but she may need to be on leave from work for a month longer, her doctors at the St. Luke’s Medical Center said on Thursday.

Ver said they would be conducting a “minor surgery to take out the halo vest” that was “pinned to her skull to further stabilize her cervical spine.”

Ver said that the halo vest, although uncomfortable, was “a must right now.” He however added that the former president was now able to talk although she was still on a liquid diet.

Dr. Juliet Gopez-Cervantes, the former president’s physician, said that her patient was back in the coronary care unit where her recovery would be monitored until she could be transferred to a regular room.

Doctors will be evaluating Arroyo’s condition in the next 7 to 10 days to check if she can be transfered to a regular room, said Cervantes. She said that the “halo vest stay on for at least a month.”

Arroyo was scheduled for surgery last Tuesday but doctors had to push the date to Wednesday because of fever.

Marilen Lagniton, vice president for customer affairs, said doctors decided to push through with the operation after Arroyo’s fever went down.

Arroyo went through a third operation after doctors discovered that the titanium implant in her cervical spine had been dislodged because her bones were of “poor quality to hold screws.”

The doctors said they gave Arroyo a nine-millimeter titanium mesh, containing bone graft harvested from her pelvic bone and which they would monitor for bone growth for three to four weeks.

“The titanium mesh cage filled with bone graft was inserted as a strut [tukod] anteriorly in her cervical vertebrae and were stabilized further with kick plates,” Ver said.

Bone growth from the mesh would fuse Arroyo’s spine that would enable her doctors to remove her halo vest, said Cervantes.

The former president underwent surgery last July 29 and August 10 to place a titanium implant but both attempts failed.

Arroyo’s first surgery was done last July 29 at the same hospital where titanium implants and bone substitute were used to rebuild her spine.

She had to undergo revision surgery last August 10 after doctors found out that the implants connecting four levels of her spine had been dislodged. The replacement of the implants, however, had to be postponed by what they initially thought was an infection. The doctors later ruled out infection and said that Arroyo’s poor bone quality caused by hypoparathyroidism had been hampering the former president’s recovery.

With a report from Tina Santos, Inquirer