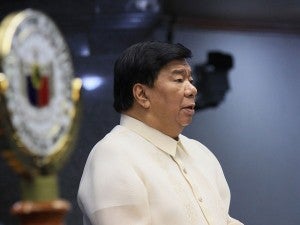 MANILA, Philippines—President Aquino’s decision to abolish the pork barrel is a “big gamble” because he has placed himself at the mercy of Congress which could conceivably impeach him for cutting off their pipeline to the national treasury.

Speaker Feliciano Belmonte Jr. agreed that in theory, any legislator opposed to the President’s abolition of the Priority Development Assistance Fund (PDAF) would seek to kick him out of office. “Yes, hypothetically. But there is really no ground to impeach him.”

Akbayan Rep. Walden Bello said the President’s declaration that it was time to abolish the pork barrel took some courage to make considering the resentment it would cause among members of Congress.

“Theoretically, one-third of the House can impeach him, but I doubt if there would be anyone who would be foolish enough to court popular condemnation by initiating such a move on the pork issue. The fact is Congress has been completely outmaneuvered by the President’s move, and it can’t do anything about it because pork is so unpopular. The President, the media, and citizens’ opinion is a formidable alliance,” Bello said in a text message to the Inquirer.

“Yes, it is a brave act, though he needs to ensure the PDAF is not simply replaced by a new pork system,” he added.

Senate President Franklin Drilon said that while the PDAF would be abolished as declared by the President, each lawmaker would still retain their right to direct a portion of the annual budget (P200 million  for each senator and P70 million for a representative) to a hospital or a road project that they desired.

“What will happen if we will not take a direct hand (in the identification of projects)? Let’s just abolish Congress then,” he said.

Drilon said the only difference from the reviled pork barrel system and the President’s plan was that these allocations would be made during the regular public hearings on the budget in Congress and that the funds would go directly to the implementing agency and not to nongovernment organizations. The NGOs handle the implementation, monitoring and reporting under the current system.

In a radio interview, Drilon defended the right of the representative or senator to retain his or her “power of the purse,” or constitutional mandate to set the state’s spending and taxation.

“I will repeat the question, if a road is needed, what is wrong if the proposal will come from a congressman just to get it done? Let’s say a bishop (will make the proposal), what is the difference? What is important is that the identification of the project goes through the proper budget process and proper implementation,” said Drilon who claimed to have spent his pork funds on school buildings, public hospitals and indigent patients.

He stressed that the lawmaker would have no say on what entity would implement the project.

Drilon also assured the public that the Senate would approve the freedom of information bill along with the abolition of pork but he could not make any guarantee on the House’s action.

Then President Gloria Macapagal-Arroyo used the pork system and other state funds, such as the multibillion-peso Malampaya Fund and the massive annual savings from the reenacted budget, during her term, copiously to please friends and foes alike.

This is seen from the Commission on Audit (COA) special report from 2007 to 2009, which suggested that Arroyo used the pork barrel system to stymie multiple efforts to impeach her after her reelection in 2004 due to public alarm on corruption scandals and election cheating charges.

Critics of President Aquino have also accused him of deploying pork barrel funds to force the ouster of former Ombudsman Merceditas Gutierrez (who resigned before the start of her Senate trial) and former Chief Justice Renato Corona as well as push for the passage of the reproductive health bill and the amendments to the sin tax law (lawmakers were enticed with pork to attend a session and ensure a quorum).

With 289 members in Congress,  only 96 votes are needed to carry an impeachment case against the President to the Senate where at least two-thirds have declared publicly, for now, that they supported the President’s move to abolish the pork barrel.

But Eastern Samar Rep. Ben Evardone was doubtful whether an impeachment case would prosper against the President in retaliation for his decision.

Bello has some advice for lawmakers grumbling about the imminent loss of their pork.

“If members of Congress had any sense, they should just surrender on the PDAF issue and concentrate on legislation. Or if they’re interested in getting rich, they should just quit Congress and join the private sector or join the Abu Sayyaf in the hostage-taking business. In fact, what (fugitive Janet Lim) Napoles’ accomplices in Congress engaged in was pirate capitalism that is hardly different from the entrepreneurial activities of the Abu Sayyaf,” Bello said.