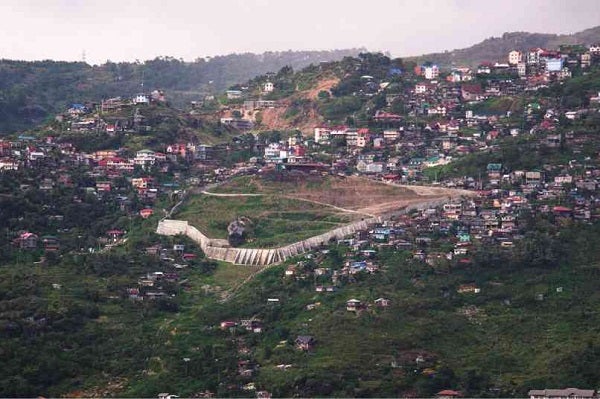 The Mines and Geosciences Bureau (MGB) said repairs and a new protocol for Philex Mining Corp.’s Padcal mine helped keep water away from its tailings pond, which was breached by strong rain on Aug. 1 last year, spilling 20 million tons of mine wastes into the Balog Creek in Itogon town, Benguet province.

Even the Little Kibungan community, which lost 77 residents when Typhoon “Pepeng” struck La Trinidad town, Benguet province, in 2009, had not been bothered too much by the strong rain. The Department of Public Works and Highways (DPWH) is building a concrete wall around the mountain looming over Little Kibungan in Barangay Puguis.

Portions of that mountain eroded in October 2009, burying houses and residents in mud and rocks.

The weather bureau recorded 144.8 millimeters of rainfall from 8 a.m. on Wednesday to 8 a.m. on Thursday in Baguio City. But only 6.4 mm of rain was dumped here from 8 a.m. to 2 p.m. on Thursday, said Raymond Gerard Ordinario, Baguio weather specialist of the Philippine Atmospheric, Geophysical and Astronomical Services Administration.

Fay Apil, acting Cordillera director of the MGB, said government geologists did not detect major anomalies in the Cordillera that would have been triggered by the weeklong rain.

“We saw the same areas erode, and the [DPWH] was already positioned in those areas to clear the landslides,” she said.

The MGB, however, has kept a close watch on Philex and Little Kibungan, she said. Philex has been sending regular dispatches to the MGB since the heavy rain started battering the Cordillera, she said.

The latest bulletin from Libby Ricafort, Philex vice president and Padcal general manager, indicated that 137.6 mm of rainfall from 9 a.m. on Wednesday to 9 a.m. on Thursday had not affected the newly repaired Tailings Storage Facility No. 3.

“No signs of sinkholes or depressions on the embankments were observed,” he said.

Apil said Padcal operators had built a spillway to divert rainwater from the pond, which the mine had been filling up with mine wastes from its operations.

“They also covered the passageway to the [freshly repaired] penstock [inside the dam where water used to be channeled out of the facility], as an extra precaution to make sure no water would seep in,” she said.  Vincent Cabreza, Inquirer Northern Luzon