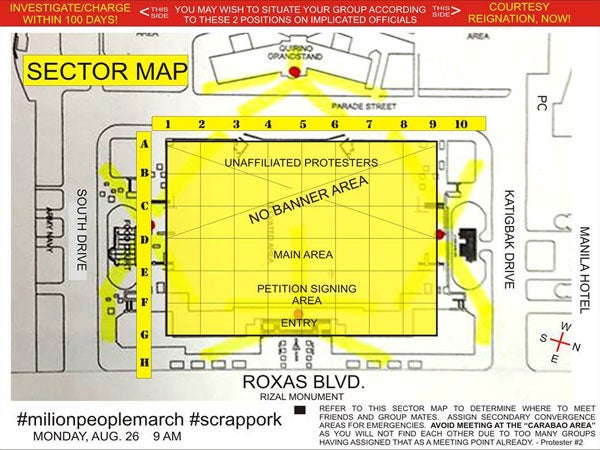 MANILA, Philippines – Participants of the “Million People March to Luneta” are getting ready for Monday’s protest against the pork barrel system.

On Facebook, at least 18,143 people have confirmed their attendance for the event, with many encouraging others to join. Online events similarly named had around several hundreds to thousands of attendees.

The “Million People March,” which started as an online campaign against the Priority Development Assistance Fund, aims to gather a million people on National Heroes Day.

From the initial plan of a peaceful rally in Luneta, the drive snowballed into a national campaign as enraged netizens agreed to hold similar protest actions in various convergence points across the country.

As protest art and memes circulate online, various groups have also come up with paper maché images and statement shirts to bring to Luneta.

Bagong Alyansang Makabayan assured others that there will be no effigy-burning but said they will parade a “life size barrel man,” placards and streamers to protest the misuse of pork barrel funds.

Professionals and business groups in Cebu also came out with face masks, shirts and stickers for distribution to participants.

Participants said the “picnic protest” will push through amid President Benigno Aquino III’s decision to finally abolish the PDAF.

“We were heard but we want him to listen,” someone announced on the “Million People March” event page.

Many believed the statement was made to preempt the “Million People March.”

Various groups stated that the Aquino administration should abolish all lump sum and discretionary funds, including the President’s Social Fund dubbed by critics as “presidential pork.”

Netizens were enraged with Budget Secretary Florencio Abad’s announcement that the PDAF allocation for 2014 will be kept in the proposed government budget.

Some groups also said they are waiting for the prosecution of officials found to have misused the funds.

Bishops all over the country also supported calls to junk the pork barrel system.

In a pastoral letter read in all churches in Camarines Sur, Caceres Archbishop Rolando Tria Tirona called for the “lawful conviction of those guilty.”

Meanwhile, Lucena Bishop Emilio Marquez criticized the president for announcing the abolition of the PDAF amid its retention in the 2014 national budget.

Blogger Noemi Dado told INQUIRER.net that while there are no “central organizers” for the event, some of them met last week to talk about several issues involving the “picnic protest.”

They had agreed that groups can hold decentralized programs and activities in the grounds. On the other hand, participants will also be asked to register upon entering the venue.

Areas have been designated for those with banners and another one for those without groups. People are encouraged to go around and listen to various lectures and programs.

Many had volunteered as marshals, while some groups will be lending ambulances and portalets.

The Manila City government announced that they are closing parts of Roxas Boulevard to traffic as early as 5:30 am.

The event is expected to end at around 2 pm.

Before going to Luneta, some groups have designated their own assembly points.

Youth Act Now has groups coming from Liwasang Bonifacio, the Philippine General Hospital and Quezon City Hall, among other areas.

Students and faculty from schools such as the De La Salle University and St. Scholastica’s College in Manila also have their own meeting places.

Labor center Kilusang Mayo Uno also said that they are ready for the protest on Monday.

“We have called upon our regional chapters to join the protest and tens of thousands of workers and the poor will join nationwide,” said KMU media officer Jerome Adonis.

Adonis said they are hoping that the “Million People March” will be the start of bigger protests against other discretionary funds and systemic corruption in the government.

The Cebu Archdiocese scheduled an 8 am mass on Monday, an hour after the scheduled march-rally from Fuente Osmeña to Plaza Independencia.

In Negros Occidental, “Tipon Tipon sa Lagoon” was set at 9 am in front of the provincial capitol building in Bacolod City.