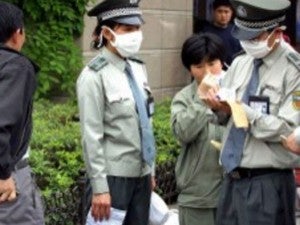 Enforcement officers wearing masks write up a fine of 50 yuan (six US dollars) after catching a man for spitting on a street in the eastern Chinese city of Hangzhou 11 May 2003. AFP FILE PHOTO

MANILA, Philippines – Spitting in public may in the future cost you P500 to P2,000, if a lawmaker gets his way.

Alliance of Volunteer Educators party-list Rep. Eulogio Magsaysay proposed to criminalize spitting in public places to prevent the spread of diseases such as tuberculosis (TB).

“With the occurrence of global pandemics like SARS, bird flu and other contagious and airborne diseases, there is an urgent need to change hazardous society habits like spitting,” Magsaysay said in a statement released Sunday.

Under House Bill no. 299 or the Anti-Spitting Act of 2013, any person caught spitting in a public place will be fined P500 for the first offense, P1,000 for the second and P2,000 for the third. Those who are caught for the third time will also be required to attend a health seminar or face a jail term not exceeding six months.

Magsaysay said spitting has been identified as one of the factors in the spread of TB and the bacteria that causes the disease “can survive in a dried state for weeks up to eight months.”

The lawmaker also said anti-spitting laws are already being enforced in Singapore, India, Malaysia and China.