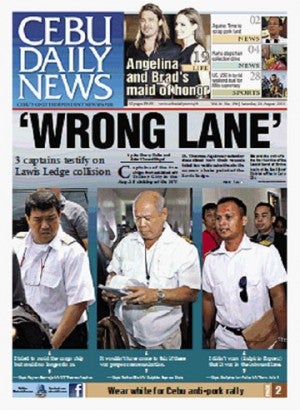 Captains of the two ships that collided off Talisay City in the Aug. 16 sinking of the MV St. Thomas Aquinas yesterday described how their vessels tried to avoid each other in the narrow choke point of the Lawis Ledge.

Appearing before the first hearing of the Board of Marine Inquiry (BMI) in Cebu City, the captains said they sent several radio messages when the distance was about two nautical miles apart but never made contact on radio.

He wiped away tears as he narrated the events leading to the collision that took place at 8:46 p.m.

“I am emotional when I remember those people (victims),” said Gilo, referring to the 2G0 passenger vessel which quickly sank with 870 people on board.

As of yesterday, 75 were recorded dead and 45 are still missing.

The captain of a third vessel, the Trans-Asia 9, also testified about overtaking the cargo ship shortly before reaching Lawis Ledge and observing that the Sulpicio Express 7 was in the “inbound” lane instead of the outbound lane as both were leaving the south port of Cebu.

The testimonies were the first time the ship captains spoke in public about the tragedy, one that produced an oil spill that continues to ruin mangroves and affected fishing communities in Cordova and Lapu-Lapu City.

“We will illicit as much information we can and find out what went wrong,” said Rueras.

As this developed, the Maritime Industry Authority (Marina) suspended the captains and crew members of St. Thomas Aquinas and Sulpicio Express Siete pending investigation of the collision.

The series of BMI hearings would be an “inquiry and not adversarial proceedings” said Lt. Johonson Fabilane of the Philippine Coast Guard, law member.

“They are here as resource persons,” he said, referring to the three captains and one survivor.

Two key factors surfaced on day one of the BMI hearing: lack of radio contact and allegations of using the wrong sea lane.

Captain Gilo denied he was occupying the wrong lane. He said they sighted the MV St Thomas Aquinas two nautical miles away at 8:34 p.m. and immediately contacted the vessel for a port-to-port passage but there was no response from the Aquinas.

“I was not on the wrong side of the channel. We were in the middle of the outbound lane so we assumed that everything would be all right,” Gilo said.

When the cargo vessel started to change its course, the Aquinas allegedly swerved to its left which resulted in the collision at 8:46 p.m., he said.

Gilo said that one of the his men shouted that the passenger vessel had changed its course abruptly.

“There was no more chance to do something,” he said. “It happened in a matter of seconds.”

Captain Reynan Bermejo of MV St. Thomas Aquinas was the first to testify and gave a different story.

“On my radar, it appears that the ship (Sulpicio Express Siete) was occupying my lane. When the distance between the two ships was around 2.6 nautical miles, I tried to call the other ship through radio. We kept on calling her but there was no response,” said Bermejo, who was accompanied by two Manila-based lawyers.

He said the first time he tried to contact Sulpicio Express Siete was at around 8 p.m. or about 40 minutes before the collision.

“There was actually no communication that happened between us. I tried calling Sulpicio Siete but no one answered the calls. Five minutes before the impact, I knew that there was a possibility of a collision between the two ships,” he said.

Bermejo agreed with the BMI that maritime radio channels are not always reliable.

“I could hear signals from other ships within our vicinity and some said ‘magbabangaan na yan. (There will be a collision).’ Most of the time, I heard jokes from other vessels through the maritime radio,” he said.

Bermejo said he and four crew members of St. Thomas Aquinas were on the bridge of the ship to monitor incoming vessels.

While approaching the Lauis Ledge, he said he could not manuever the ship to the right because Sulpicio Express Siete was approaching.

“I could no longer alter to starboard (right) because of Sulpicio. More so, the sea on my rightmost part, was shallow. I couldn’t enter the (Mactan) channel. So I later decided to maneuver the ship towards the portside to avoid Sulpicio. But Sulpicio also manuevered towards my direction. I tried to evade the cargo ship but I could no longer do so. The two ships eventually collided,” he said.

Bermejo, who manned St. Thomas Aquinas for 11 months, said he tried to increase the speed of his ship to avoid the sea collision.

“I usually reduce my speed in going inside the Mactan Channel. But at that time, I didn’t do it because there was a threat from Sulpicio,” he said.

Using a pencil and compass, Bermejo draw the position of the two ships on its voyage on a map.

He admitted that St. Thomas Aquinas wasn’t able to give a signal to Sulpicio a few minutes before the collision because he tried to alter his course to avoid the passenger ship.

Bermejo, who hails from Bacolod City, was skipper of the St. Thomas Aquinas for 11 months. Asked if he underwent a liquor test after the collision, he said no. Bermejo submitted his voyage plan, sketch, map, and affidavit to the SBMI.

“I observed that she (the cargo vessel) was in the inbound lane so I overtook her starboard side in the outbound lane,” Faller said.

“I did not warn her (Sulpicio) who was in the inbound lane because I assumed that they know what they were doing,” he said.

The use of radio channels was also emphasized.

Based on the Sulpicio captain’s accounts, they were communicating with the Trans Asia vessel through Channel 16 then switched to Channel 12 at the request of Trans Asia.

This was contradicted by the captain of Trans Asia who said it was the Sulpicio Express that requested to change the radio frequency.

Today, the hearing will resume with crew members of both vessels and more survivors More people will be called to testify today, when the hearing resumes at the Coast Guard office in Cebu.