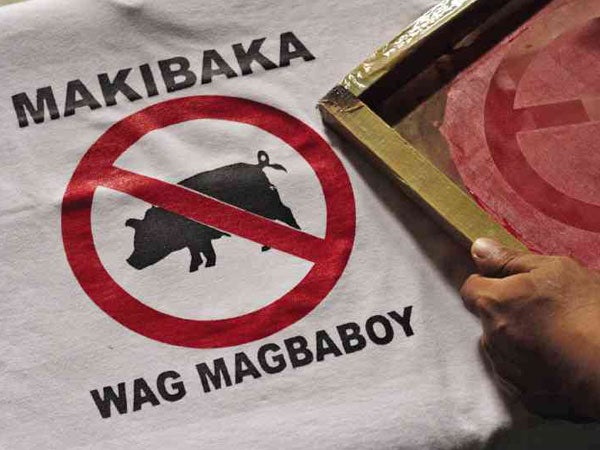 In preparation for the Million People March against the corruption of the congressional pork barrel, volunteers on Monday start printing shirts for the Davao City edition of a looming nationwide protest initiated by angry netizens. KARLOS MANLUPIG/INQUIRER MINDANAO

Netizens all set to join what they expect to be a huge anti-pork-barrel rally on Monday said the President wanted only to “preempt” the social media-initiated mass action dubbed “Million People March to Luneta.”

Raymond Bandril, one of the organizers, said his group was “dead serious” in pushing through with the protest action, despite Aquino’s call to scrap the pork barrel and replace it with a supposedly more transparent system.

“We will proceed, to be sure,” he told the Inquirer. “Abolition is not the only thing we want. We want justice and to make the culprits answerable.”

Bandril, whose own group was targeting some 100,000 participants, said the mass action ought to be “off-limits” to politicians who enjoyed their share of the pork barrel.

“We don’t want politicians to hijack the mass action,” he said. “Besides, we can’t control the sudden burst of emotion there.”

Bandril recalled one Facebook thread when netizens slammed two politicians — an ex-governor and a militant former congressman— for allegedly trying to get into the picture.

Former National Treasurer Leonor Briones said the PDAF in question is but around 5.5 percent, or P25.4 billion, of Malacañang’s “special purpose funds”  in the proposed 2014 national budget.

In a previous interview, Briones said the President exercises control over the special purpose fund, which is pegged at nearly P450 billion next year.

Another source of presidential pork barrel are earnings of the Philippine Amusement and Gaming Corp., which remitted P2.028 billion to Aquino last year. The amount is around P2.25 billion this year and is projected to balloon to P2.5 billion the following year.

Buhay Representative Lito Atienza, who earlier called for the suspension of the pork barrel, commended the President for his “sensitive decisiveness on the issue and heeding the people’s outrage.”

Iloilo Representative Jerry Treñas described Aquino’s move as “unprecedented” and “would certainly help in ensuring transparency on the use of public funds.”

“President Aquino made a very brave decision on this pork barrel issue. This is a giant step forward in our fight against corruption,” he said in a press release.

Samar Representative Mel Sarmiento of the Liberal Party said Aquino’s decision “speaks a lot about his determination to defy the conventions of business-as-usual politics and set in place all the needed reforms to defeat all forms of corruption in government.”

“The complete abolition of the (PDAF) appears to be the spur-of-the-moment answer by people understandably angered by the extent of reported anomalies on the controversial pork barrel.  But this may not, after all, be the best option,” he said then.