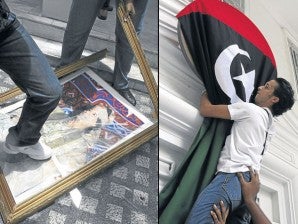 DEFECTION IN MANILA. In this composite photo, Libyan expatriates and embassy personnel stomp on the portrait of Libyan strongman Moammar Gadhafi on Wednesday at the Libyan Embassy inside the posh Dasmariñas Village in Makati City. At right, a Libyan expat hangs the rebels’ National Transitional Council flag. Libyans gathered at the embassy to announce their withdrawal of support from Gadhafi. AP/Bullit Marquez

The Department of Foreign Affairs (DFA) on Wednesday expressed support for the National Transitional Council (NTC) in Libya following the defection of the Libyan embassy in Manila to rebels in control of much of the North African country.

In a statement, DFA spokesperson Raul Hernandez said that the Philippines “welcomes the imminent resolution of the conflict in Libya.”

“The Philippines supports a peaceful transition in Libya in order for normalcy to return to this country, and looks forward to working with the Libyan people in pursuing peace and stability,” he added.

“The Philippine government thanks the Libyan people for keeping Filipinos and their families in Libya safe and for the hospitality extended to them throughout the conflict, including medical workers who chose to remain in order to continue providing emergency humanitarian assistance to all parties in conflict.”

Hernandez said in an earlier news briefing that the Libyan embassy in Manila had declared support for the Libyan rebels. “The embassy had sent a note verbale stating they will be changing their flag starting today (Wednesday),” he said.

The DFA spokesperson said Libyan embassy officials would still be accorded diplomatic status because their accreditation had not been recalled by Tripoli.

Diplomats and expats at the Libyan embassy in Manila smashed portraits of Moammar Gadhafi and raised the rebel flag in the latest wave of defections against the longtime leader at Libyan missions worldwide.

Diplomats at the mission in Makati City pulled down Gadhafi’s green flag and raised the rebel flag on Wednesday while young expatriates smashed glass-covered portraits.

Zarroug said prodemocracy rebel forces are fighting pockets of Gadhafi loyalists in the Libyan capital, but that “probably in a few days, everything will be over.”

In his news briefing, Hernandez warned Filipinos still in Libya that it was still “too dangerous to go out.” He said this was the assessment of Foreign Undersecretary Rafael Seguis, who is on mission in Libya to help address the needs of Filipino workers.
More than 26,000 Filipino workers were in Libya when antigovernment protests erupted six months ago. Around 13,000 of them have been repatriated, but Filipino officials could not account for the rest, other than the several thousand who had requested assistance to leave as violence escalated last week.

Hernandez said the overseas Filipino workers (OFWs) who wanted to be repatriated in the transition period could still do so under the government’s evacuation program.

“Representatives from the rebel groups have already visited our embassy in Tripoli and assured us of a safe corridor for the passage of our OFWs to the port of Tripoli and onward repatriation, when we are able to firm up our plans,” Hernandez told reporters in Malacañang.

The Geneva-based International Organization for Migration (IOM) has dispatched a ferry to Tripoli to evacuate migrant workers from the troubled country.

The Philippine government has requested the IOM to include Filipinos in the evacuation to Alexandria in Egypt for onward flights to Manila.

Hernandez said the safety of the OFWs remains the priority of the government, pointing out that Manila had ordered the mandatory evacuation of Filipinos in Libya.

“Our priority is their safety and security and we are now firming up the plan with the IOM. Once everything is set we will have the 91 Filipinos who have expressed their interest on being repatriated and get them on board,” he said.

The DFA also announced on Wednesday that the Filipino engineer reportedly abducted by Libyan rebels in Tripoli on Tuesday was back in “safe hands” but doubts persist whether he was really carried off by force.

Foreign Undersecretary Esteban Conejos told the House committee on overseas workers affairs that Philippine embassy officials in Tripoli would verify reports that the engineer, whose identity has so far been withheld, was kidnapped.

The Inquirer learned the engineer’s identity to be Edwin Daproza.

“What is important is we located him and that he is back in safe hands. We can confirm that he got lost, he was found and that he is now safe. We will investigate later on if he was kidnapped or not. Our reports had it that he was abducted by armed men,” Conejos said.

He also said that the DFA had stepped up its monitoring of countries in the Middle East and North Africa in view of fears that civil unrest would spread throughout the region. He said the DFA was preparing for the worst case scenario in these countries.

In Syria, Conejos said the repatriation of at least 300 Filipino had been stymied by demands of Syrian employers for “pretermination fees” and by Syrian state officials imposing immigrations dues as penalty for the undocumented Filipinos.

He said while the DFA was prepared to shoulder the plane fare of all OFWs out of Syria, it had no budget for the pretermination of contracts.

He explained that employers had maintained that the situation in Syria was normal and that the departure of OFWs was in violation of their contract.

Also on Wednesday, a Filipino Catholic priest assigned in Tripoli advised Filipino workers who were able to return to the Philippines not to come back to the war-torn country anymore because the situation there was still volatile.

But Fr. Amado Baranquel, parish priest of San Francesco Tripoli, also sought to dispel fears among families and relatives of Filipinos still in Libya, saying that they were safe in their homes and workplaces.

“It’s just the firing and the sounds of fighting and firing [that] are so terrifying,” Baranquel said in a telephone interview with the Church-run Radio Veritas.

“It’s still too chaotic … please just pray for a speedy transformation of the country,” he added. With reports from Norman Bordadora, Gil C. Cabacungan Jr., Jocelyn R. Uy and AP