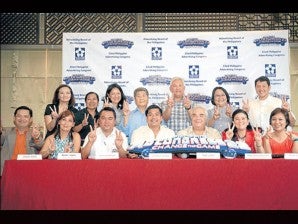 Amid rapid advances in technology and ever-shifting market moods, it’s the sink-or-swim challenge underlining this year’s biggest gathering of the country’s advertising and media industry players.

With this theme, organizers of the 22nd Philippine Advertising Congress are pushing participants to not only keep up with the evolution but be its very catalysts in a world where competition intensifies by the day and customers drowning in choices demand more for less.

Running from Nov. 16 to 19, “AdCongress22” will be held at the world-class CamSur Watersports Complex in Camarines Sur province, which last year dislodged Boracay as the top destination in the country for both domestic and foreign tourists.

The 2011 congress will be hosted by the media sector, along with the Advertising Board of the Philippines.

“This is something we do for love of the industry,” according to Philippine Daily Inquirer president and CEO Sandy Prieto-Romualdez, overall chair of AdCongress22.

“The pursuit of excellence—personally and professionally—drives the industry people to offer their services to the ad congress,” Romualdez said.

A total of 1,444 delegates had registered online, an innovation marking this year’s event and in keeping with the tech-driven theme, Romualdez said.

The e-registration finally did away with the long queues and tedious paperwork at the AdBoard office. The new system also included online bookings for accommodations in CamSur, she explained.

The administration committee chair Blen Fernando, vice president for marketing of Alaska Milk Corp., said the online registration proved to be “very convenient” for the organizers.

This year’s local and international speakers include leading voices in marketing, advertising, mass media, and sports and the arts.

A featured speaker, Charlene Li, is a coauthor of the best-selling book “Groundswell.” A pioneer in social media, Li was cited in 2010 as one of Top 100 Most Creative People in Business.

Filipino “game changers” in the arts and sports will also share their learnings in a panel discussion.

Preparations are also underway on the part of the local government of Camarines Sur.

The CamSur Watesports Complex is currently adding 70 cabins in its Villa del Rey Hotel to accommodate at least 200 delegates at a site close to AdCongress22 venues. Those who cannot be accommodated within the complex may stay in hotels in nearby Naga City.