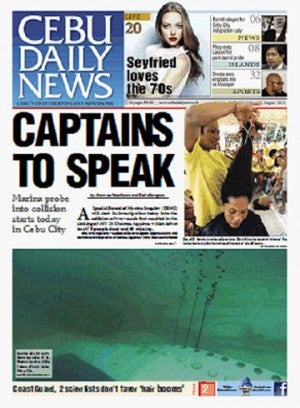 A Special Board of Marine Inquiry (SBMI) will start its investigation today into the collision of two vessels that resulted in the sinking of MV St Thomas Aquinas which left at least 75 people dead and 45 missing.

The two captains – Rolito Gilo of Sulpicio Express Siete and Reynan Bermejo of St. Thomas Aquinas- have been summoned to appear before the board at 9 a.m. in Cebu City.

Both skippers are expected to come with lawyers provided by their companies, said Cebu Coast Guard Station Commander Weniel Azcuna.

The ship captain and chief mate of MV Trans Asia 9 were also summoned to appear because Gilo, in his marine protest, mentioned that the Trans Asia vessel had contacted him through VHF radio and requested to overtake the Sulpicio Express Siete on its starboard (right) side.

Trans-Asia may be asked why their crew were unable to help in the rescue effort after the collision.

Key issues for the inquiry will focus on how the two oncoming vessels failed to avoid each other in a narrow channel of Lawis Ledge, where shallow portions require ships to steer carefully and observe protocols about transport lanes and collision avoidance.

“These things will be clarified during the hearing,” Azcuna said.

The death toll in the sea accident stood at 75 with 45 missing persons.

Three additional bodies were recovered yesterday as technical divers continue to penetrate the vessel to look for more trapped passengers and plug bunker oil leaks in the vessel’s tanks.

The upper torso of a woman was fond floating off the coast of barangay Bangbang in Cordova town.

Azcuna said the hearings will be conducted in Cebu because the Aug. 16 accident happened here and so it’s easier for the people involved and the witnesses to appear.

Eventually, he said, the SBMI will also summon the other crew members of the two vessels, some survivors and other witnesses including the fishermen and people who first responded to the accident in Lawis Ledge off Talisay City.

“The result of the board investigation is a basis for a filing of charges of both administrative and criminal charges”, Azcuna said.

The SBMI is headed by Commodore Gilbert Rueras, commander of the Coast Guard’s Maritime Safety Services based in Manila.

Rueras and other members of the board arrived at 5:30 p.m. yesterday.

Azcuna said the board is composed of officials and legal officers from Philippine Coast Guard and Maritime Industry Authority (Marina) plus some master mariners.

The Cebu Coast Guard only served the summons but is not part of the SBMI.

He said the Cebu Coast Guard is tasked to focus on the search, rescue and retrieval operations as well as the effort to contain the oil spill.

“The board is tasked to conduct a formal investigation regarding of what transpired and what was the cause of the accident”, Azcuna said.

2GO Shipping Lines and Philippine Span Asia Carries Corp. both assured that their captains are in their custody and will appear for the investigation.

The skippers are also being monitored by the Coast Guard, said Azcuna.

“The companies will be liable for obstruction of justice if they do not produce the ship captains during the investigation,” he said.

Grant Go, Span Asia Carrier Corp. vice president, said the captain of Sulpicio Siete Express was “just staying on the ship” as instructed. The damaged vessel is docked in Pier 7.

Go said his company, the former Sulpicio Lines, is doing its own internal investigation of the mishap.

Lito Salvio, 2Go assistant vice president, said their captain is also under custody, but when pressed for details, replied that it was “confidential.”

“Rest assured that we are cooperating with Coast Guard. We are also doing our own investigation.  We will have to finish our investigation before the company decides what to do with the ship captain,” he said at a press conference.