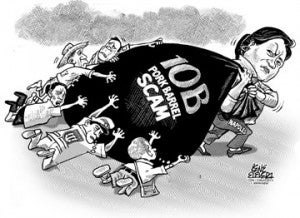 The country has been helter skelter this week.

On Aug. 16, the collision of the MV St. Thomas Aquinas and MV Sulpicio Express Siete off the coast of Talisay City plunged over 800 people into the sea and caused an oil spill that has destroyed mangroves, marine life and threatens the tourist industry in Mactan.

Then came tropical cyclone Maring and the habagat that almost sank Metro Manila and most of Luzon.

We are still reeling from the impact of the greed of Janet Napoles and national legislators who manipulated the misuse of P10 billion of pork barrel funds.

These events overshadowed the 30th anniversary of the martyrdom of Sen. Benigno “Ninoy” Aquino on Aug. 21.

Despite epic tragedies like the sinking of MV St. Thomas Aquinas and typhoon Maring, people have not forgotten Janet Napoles.

She disappeared after facing editors of the Philippine Daily Inquirer to air her side on the scam, the better to evade a warrant of arrest issued against her for a non-bailable case of serious physical detention.

In his State of the Nation Address, President Benigno Aquino IIl mentioned the ongoing P6.2 billion flood prevention project in Metro Manila. When the project is finished, the capital would no longer become a water world after a tropical storm.

In Cebu, following the Aug. 16 sea tragedy off Lawis Ledge, officials from the Maritime Industry Authority (Marina) revived a proposal to install a Vessel Traffic Management System (VTMS) in the port of Cebu, especially in the narrow entrance at the Mactan Channel.

It would cost US$3 million but the second busiest port in the country needs one to avoid accidents over the use of wrong sealanes.

With Metro Cebu experiencing more flashfloods, local officials fear we are following in Metro Manila’s puddles. Mayors are clamoring for a modern well planned drainage system to cope with rapid urbanization and the new normal of abnormally heavy rainfall spawned by climate change.

That would cost a few billion pesos more.

But as the pork barrel excesses of Napoles and congressmen would now tell us, the government does have money.

If only it was spent correctly, Filipinos would not be agonizing over floods and maritime accidents.

Sea travel which is part of life in an archipelago would be safer. Rainy days would be “bed weather“ for most people and not an agony to keep afloat.