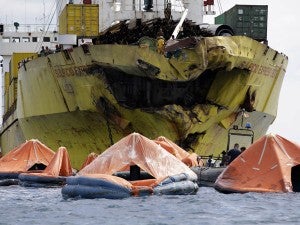 Three bodies were pulled out from the sunken ferry and and another was found off the coast of Cordova town in Cebu, according to Philippine Coast Guard Commander Armand Balilo.

The fourth body was “an adult but the lower body of the cadaver is missing,” Balilo said.

This left 45 people—39 passengers of the ferry and six crew members of the cargo ship Sulpicio Express 7—still unaccounted for as of 3 p.m. Thursday, Balilo said.

Navy and PCG ships and helicopters continued to scour the waters for the 45 still missing from the St. Thomas Aquinas ferry, said the local PCG commander Weniel Azcuna.

“We are still hoping to find more survivors but we are realistic and we expect we will find more dead bodies,” he told AFP.

The ferry sank quickly after it collided with the cargo ship off Talisay City late Friday night. A total of 750 passengers and crew out of the 870 on board were rescued.

Azcuna said divers were still searching the debris-choked vessel, and declined to set a date for when the operation would end.

The PCG, military and police are meanwhile helping clean up a large oil spill from the ferry, which has reached the coasts of nearby towns and affected mangrove forests, rich fishing grounds and sanctuaries as well as popular beach resorts, Azcuna said.

Specialized divers from Japan, hired by the ferry operator 2GO Travel, had been conducting surveys to plug the leak and contain the spill, he added.

Azcuna said 2GO had also contracted with a salvage company which was spraying chemical dispersant on the spilled oil. He could not say how much oil had already leaked out.

The doomed ferry was carrying 120,000 liters of bunker fuel when it sank, according to the PCG.

Meanwhile, a Special Board of Marine Inquiry (SBMI) will conduct an initial hearing on the sinking of the St. Thomas Aquinas on Friday at the Lawis Ledge in Talisay City.

Commodore William Melad, the PCG district commander in Central Visayas, said the SBMI will summon the crew, the two ship captains and the passengers that witnessed the accident.

Capt. Reynan Bermejo of 2GO shipping and Capt. Rolito Gilo of the Sulpicio Express Siet were in the custody of their shipping companies which have assured the PCG that the two ship captains would appear at the hearing, Melad said.

The two captains have both submitted their marine protests which will serve as primary evidence in the investigation of the collision.

Gilo and Bermejo blamed each other for the collision, saying the other vessel was occupying the wrong lane.

The SBMI will be composed of Commodore Gilbert Rueras of the Maritime Safety Services Command of the PCG, a master mariner, a chief engineer, and the Maritime Industry Authority (Marina).

The government of Spain on Thursday sent its condolences to the Philippine government and the families of the victims.

“The government of Spain wishes to convey its heartfelt condolences to the families of the victims and to the people and the government of the Philippines, and reiterates its support to the country with which Spain maintains very profound ties of friendship,” said a statement from Spain’s Ministry of Foreign Affairs and Cooperation.

Meanwhile, many relatives of the missing converged on the funeral homes where the recovered bodies were brought as they said they had lost hope that their loved ones had survived.

The sea tragedy has brought grief to many, including a mother who thought her two-year-old daughter was among the survivors after her name was on an initial list posted outside the 2GO office.

Emmalyn Sinday, 22, of Dapa, Surigao del Norte, went from one hospital to another searching for her daughter, Gwen.

When she went to the Cosmopolitan Funeral Homes in Cebu City, Sinday was shocked to see Gwen among the unidentified casualties.—Jerry E. Esplanada and Carmel Loise Matus, Inquirer Visayas, with a report from Jhunnex Napallacan, Inquirer Visayas