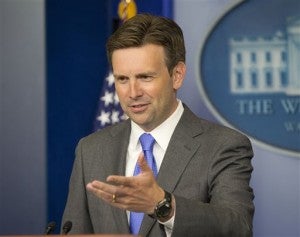 WASHINGTON  — The White House says Egypt’s 2011 revolution is “still fresh” in the minds of the country’s people and that they have shown little desire to return to the regime of its former longtime ruler.

White House spokesman Josh Earnest commented as a former leader, Hosni Mubarak, was released from prison Thursday and taken to a military hospital in a Cairo suburb. Mubarak was toppled in the 2011 uprising that led to the democratic election of Islamist leader Mohammed Morsi.

Morsi was removed from office last month by a military coup.

Earnest declined direct comment on Mubarak’s status. He says those decisions are being handled by the Egyptian legal system.

Earnest also says there has been no change in the Obama administration’s continuing review of U.S. aid to Egypt.