How do you solve a problem like flooding on Lagusnilad? | Inquirer News

How do you solve a problem like flooding on Lagusnilad? 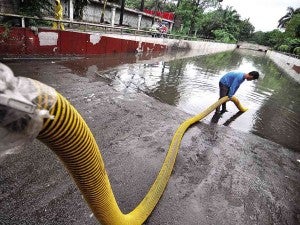 INSTANT SWIMMING POOL A worker on Wednesday pumps out floodwater from the underpass known as Lagusnilad, a Manila landmark since the 1960s which turns into a “swimming pool” during the rainy season.

Now half-a-century old, it is considered one of the first underpasses to be built in the country, a landmark in the City of Manila. But in recent years, Lagusnilad has been turning into a murky lagoon during the rainy season, challenging officials to come up with more permanent solutions.

With the water finally pumped out and normal traffic flow restored Wednesday night, the Metropolitan Manila Development Authority (MMDA) said three main factors contribute to the flooding on Lagusnilad: the poor drainage system in the area, the high tide on Manila Bay and the “water pumping” operations of a nearby golf course.

On Thursday, the MMDA sent a letter to Intramuros Administration chief Marco Antonio Sardillo III, asking his office to pump excess water from Club Intramuros Golf Course to another area—perhaps the Pasig River—and not on the surrounding roads.

“(I)t has come to our knowledge that Club Intramuros has its own pumping equipment that pumps out the excess water and discharges it on P. Burgos and Victoria Streets,” wrote Emerson Carlos, MMDA assistant general manager for operations.

The MMDA noted that floodwater in the deepest portion of the Lagusnilad can go as deep as 20 meters. Any effort on the part of the MMDA to remove the water usually gets delayed because of the additional water coming from the golf course, Carlos said.

In an interview, MMDA Chair Francis Tolentino explained that golf courses usually have lagoons which are prevented from overflowing during heavy rains to avoid damaging the turf.

“I was told that there were spillovers (from Club Intramuros) going to Lagusnilad,” Tolentino said.

But Club Intramuros resident manager Melanio Barbon denied the MMDA’s claims, saying his maintenance personnel only pump out water from the course when the water on Lagusnilad and other streets have already subsided.

“Manila is below sea level. Even Intramuros and the golf course were flooded during the heavy rains. How could we pump the water out when it has nowhere to go?” Barbon said when reached on the phone Thursday.

But he said the golf course management would still meet with MMDA engineers to discuss the matter.

Alexander Mohammad, district engineer of MMDA’s flood control department, noted that, unlike Lagusnilad, other underpasses in Metro Manila like P. Tuazon and the Shaw Boulevard tunnel remained passable to vehicles during the onslaught of habagat (southwest monsoon) earlier this week.

This is because MMDA has upgraded the portable pumps used there.

The pump for Lagusnilad, which is operated by the city government, stopped working when the floodwaters started to rise, Mohammad recalled. The water finally subsided on Wednesday night after the MMDA brought four pumps to the site. With reports from Erika Sauler and Inquirer Research