Who pays for ruined mangroves? 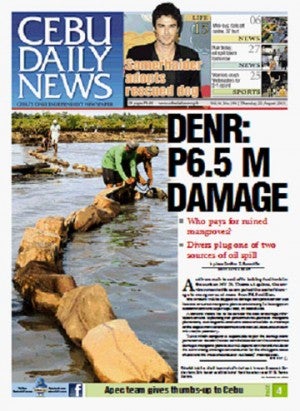 As divers rush to seal off a leaking fuel tank in the sunken MV St. Thomas Aquinas, the environment office computed the cost of damage to mangroves at more than P6.5 million.

The amount will be slapped as damage compensation for 328 hectares of ruined mangrove plantations covering 12 barangays in Cordova town and Lapu-Lapu City, an official said.

A demand notice has to be sent for the cost of damage, rehabilitation and replanting for government-supervised mangrove plantations, said Regional Executive Director Isabelo R. Montejo of the Department of Environment and Natural Resources in Central Visayas (DENR 7).

“As to which company is responsible to pay the damage compensation or absorb the cost for rehabilitation of these confirmed damaged mangrove plantations will depend on the final results of the fact-finding investigation conducted by the Philippine Coast Guard and the Maritime Industry Authority,” Montejo said.

The figure is based on a cost of P20,000 per hectare of damaged mangrove areas.

Most of the mangroves that died were less than one meter tall. The plants died of heat and suffocation with little or no supply of carbon dioxide needed in the process of photosynthesis which happens in the stem and leaves, the DENR said.

The hydrocarbons in crude oil or fuel emit or discharge a heating effect.

Burlap bags and empty water bottles tied with rope were cast out to sea yesterday as improvised oil spill booms to soak up traces of oil from the Aug. 16 collision of the MV St. Thomas Aquinas and cargo ship Sulpicio Express Siete.

The death toll in the sea accident has reached 71, as anxious families continue to flock to the Cosmopolitan Funeral Home hoping to identify their missing kinfolk.

Six more bodies were recovered, including the remains of a boy and girl.

The ferry carried 870 people when the ship was hit in the right side near the rear by the cargo vessel’s bow. Most of the 754 passengers were rescued.

Six days after the collision, divers were able to plug one of two sources of the oil leak from the vessel which sank off Lawis Ledge in Talisay City, south Cebu.

“We found out that there were two leak sources of the oil and we have successfully plugged one of the sources,” said Capt. Daniel Sarmiento yesterday.

He said the second leak was spewing “manageable” amounts of oil. This has to be sealed before the rest could be siphoned from the tanks.

Sarmiento, who was involved in the 2006 Guimaras oil spill, assured that Cebu’s situation was not as bad as that in Iloilo province.

“There is only minimal oil on top of the water. It’s not even one millimeter,” he said.

He estimated that 40,000 liters of bunker fuel remain in the MV St. Thomas Aquinas and that sealing the source of the leak would take two weeks.

A multi-national team of 73 technical divers, including Coast Guard personnel and private volunteers, joined the dive at 5 a.m. to 10 a.m., a period considered most favorable with clear visibility and fair weather.

The Japanese divers and Malayan Towage and Salvage Corp. were hired by 2GO which owns the sunken ship.

2GO assistant vice president Lito Salvio said efforts to locate and contain the source of the oil spill would continue today as their top priority.

In the 2006 Guimaras oil spill, oil tanker MT Solar 1 sank during a storm off the coast of Guimaras. It carried 2 million liters of bunker fuel of which 500,000 liters spilled out in the sea, affecting marine sanctuaries, mangroves and fishing communities in Iloilo and Negros.

For last week’s collision that resulted in an oil spill that reached Mactan island, DENR 7 said it will also compute the economic valuation to include protection cost; opportunity lost; tourism and heritage value; and provisioning value of the ecosystem such as food, medicine and others.

It said 328 hectares of planted mangroves contracted by nine peoples’ organizations (PO) in Cordova town and one PO in Lapu- Lapu city were destroyed.

These plantations were set up in 2009 to 2012 under the agency’s integrated coastal resource management project (ICRMP) funded by the Asian Development Bank and the Global Environment Facility for mangrove rehabilitation and reforestation.

The DENR will also do an inventory of “natural stand mangroves” not covered by the program.

How can a shipping firm be forced to pay?

Montejo said a multipartite memorandum of agreement (MOA) would have to be executed among the local government units of Cordova and Lapu-Lapu city, POs, DENR, and the company to “critically seal off important arrangements or agreements including the post-care programs and activities like rehabilitation and other similar activities.”

The amount collected as damage compensation should be placed in a government depository bank as a trust fund to be used for rehabilitating, reforesting and other activities that may be agreed in the MOA.

Also, barangays Calawisan, Babag, and Suba-basbas, all in Lapulapu city were affected.

Test results of oil and grease from water samples taken at the accident site and other parts in Cordova and Lapulapu will be out Friday. /Jose Santino S. Bunachita, Correspondent with Norman Mendoza, Jhunnex Napallacan, Cherry Joy Quito