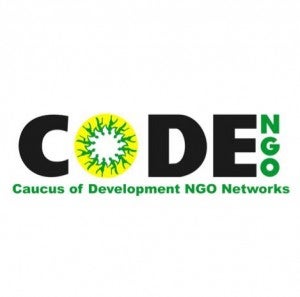 MANILA, Philippines—The Caucus of Development NGO Networks (CODE-NGO) has called on the government to implement stricter measures to ensure the legitimacy and accountability of civil society organizations (CSO) that will receive pork barrel funds.

In a position paper submitted to the Department of Budget and Management, House of Representatives and the Senate, CODE-NGO said “significant improvements in the policies and procedures for the Priority Development Assistance Fund (PDAF) have to be put in place immediately to safeguard precious taxpayer funds and to ensure the effective use of government funds for development and poverty reduction.”

It said, however, that its members, consisting of 12 CSO networks with 1,600 base organizations nationwide, had yet to reach a consensus on whether to abolish the PDAF.

While the PDAF remains, the group has recommended that stricter guidelines be put in place, especially since fake NGOs have been involved in the alleged P10-billion pork barrel scam believed to have been masterminded by Janet Lim-Napoles.

“It is clear to us that the latest pork barrel scam unfortunately allegedly involves the use of fake NGOs by some ‘businesspersons,’ government officials and legislators.”

“However, we firmly believe that any proposal to disqualify all NGOs/CSOs from receiving PDAF or other government financial support is grossly unfair to the many legitimate CSOs doing good work in many parts of the country and merely diverts attention from the true causes of the ‘pork barrel scam,’” said the CODE-NGO paper, a copy of which was furnished the Inquirer.

CODE-NGO issued the paper in the wake of the pork barrel scam and the release of the Commission on Audit (COA) report validating claims that pork barrel funds had been misused.

Sixto Donato C. Macasaet, CODE-NGO executive director, welcomed the comprehensive COA report but said it was unfortunate that around 80 dubious NGOs had been identified in the report as having received P6 billion in PDAF from 2007 to 2009.

“But this should not tarnish the reputation of tens of thousands of NGOs in the country. We agree that the involved government agencies cannot wash their hands of this, same for the legislators. We hope there will be a speedy investigation and prosecution of all those involved in these anomalies, whether from Congress and the Senate, government agencies, private firms or fake NGOs,” Macasaet told the Inquirer.

Among the recommendations of CODE-NGO is to require members of the House and the Senate to submit annual reports on their PDAF projects, which would then be distributed to members of local development councils and posted at municipal, city or provincial halls so that people would know where the money is going.

As for the CSOs, CODE-NGO recommended that these be validated. One way is to require organizations to get a certification from the Philippine Council for NGO Certification (PCNC).

The PCNC is an independent and CSO-initiated and -managed certification institution recognized by the Department of Finance. It certifies CSOs for good governance, financial management and track record for creating a positive impact on beneficiaries.

CODE-NGO likewise urged the government to amend a COA circular so that organizations that have been operating for less than three years would not be qualified to receive PDAF funding support.

“Still, if ever PDAF funds are again used in the future to support NGOs/CSOs, we believe that policies and procedures have to be improved to ensure the legitimacy and accountability of these organizations,” it added.