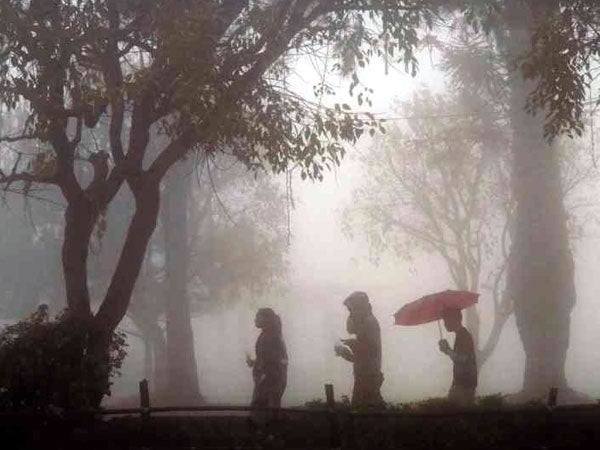 Although Maring (international name: Trami) never hit land, it intensified the southwest monsoon (habagat), generating torrential rains that pounded Metro Manila, Central and northern Luzon and two other regions to the south of the main island for five days.

In Biñan, the sight of streets thick with mud and strewn with storm debris greeted Aquino as he neared the evacuation center at De la Paz Main Elementary School.

More than 85,000 people (20,000 families) fled their homes at the height of the flood in Laguna, and were huddled in 49 evacuation centers, including the elementary school visited by the President.

“Of course, we saw the mud in the middle of your town. And we we’re here to offer help, and check on your needs, if any,” Aquino told the evacuees before starting to give away bags of food inside the school.

Accompanied by Defense Secretary Voltaire Gazmin, Interior Secretary Manuel “Mar” Roxas and Social Welfare Secretary Corazon Soliman, Aquino tried to lift the evacuees’ spirits by announcing that Maring had blown out of the country and that they could expect the weather to improve soon.

“The government is ready in the face of this calamity, and rest assured we have sufficient resources to bring you back to stability soon,” Aquino told the evacuees.

In his second stop, at the Landayan covered court in neighboring San Pedro town, the President said Maring’s exit would give him and the government more time to visit thousands of other calamity victims.

“The rain that hit us was heavy. It was estimated to be equivalent to a month of rainfall,” he said.

Aquino said he was coordinating with Laguna Gov. ER Ejercito, Rep. Dan Fernandez and the mayors to help bring the calamity victims’ lives back to normal.

“Let’s help one another. That is what’s needed at this time. I won’t take long, but I repeat the government is here to serve you. It was established for that purpose, and you should expect that,” he told the crowd of flood victims that packed the court.

The President said that while the “unusual” volume of rain was an act of nature, some companies would have to pay for blocking waterways, but he did not identify those companies.

On Tuesday night, Aquino inquired from Justice Secretary Leila de Lima about the status of cases against individuals or companies blocking waterways in the capital.

“Specifically, we’re talking here of big establishments. I won’t mention the companies, but there are two companies. Two cases will be filed; the first is a civil suit, and then, a criminal suit,” he said.

The objective of the legal action is demolishing illegal structures and clearing the waterways, Aquino said.

Public Works Secretary Rogelio Singson said his department was undertaking “drainage improvement” in the metropolis, including work on Boni Avenue in Mandaluyong City to eliminate flooding in the Maysilo Circle, and on Blumentritt Street in Manila.

Displaced from their flooded homes and living in evacuation centers or seeking shelter with friends and relatives as of Wednesday were 281,126 people (59,795 families).

Out of Philippines but …

Maring left the Philippine area of responsibility at about 10 a.m. Wednesday, after intensifying to wind speeds of 105 kilometers per hour with gusts of up to 135 kph.

The storm was heading toward Taiwan at 20 kph. It was expected to pass just north of Taipei sometime after nightfall.

An increase of 10 kph in sustained wind speed would cause the storm to be upgraded to typhoon status.

The Philippine Atmospheric, Geophysical and Astronomical Services Administration (Pagasa) said that despite its early departure, Maring would still generate heavy to torrential rains (10-40 millimeters per hour) within its 500-km diameter.

There was no immediate relief for the exhausted residents of Metro Manila who had been reeling from five days of rain and flooding.

Pagasa has three levels of alert for rainfall: yellow, orange and red, with red as the most serious.

In Pagasa’s final bulletin on the storm, it said Maring would continue to intensify the southwest monsoon, which had been generating moderate to heavy rain showers and thunderstorms over Luzon, particularly the western section of the island.

The weather bureau advised fishermen, especially those using small seacraft, not to venture out into seas off Luzon due to the big waves generated by the intensified southwest monsoon.

Pagasa said Metro Manila, Ilocos, Central Luzon, Calabarzon (Cavite, Laguna, Batangas, Rizal and Quezon), the provinces of Benguet and Batanes, and the Babuyan Group of Islands will experience monsoon rains that may trigger flash floods and landslides in the next 24 hours.

The Visayas, the rest of Luzon, and the regions of Caraga and Davao will have cloudy skies with light to moderate rain showers and thunderstorms, the bureau said.

The rest of Mindanao will be partly cloudy to cloudy with isolated rain showers or thunderstorms, it said.

Moderate to strong winds blowing from the southwest will prevail throughout the archipelago and the coastal waters will be moderate to rough, it said.

At a press conference late Wednesday, NDRRMC Executive Director Eduardo del Rosario gave credit to Pagasa for its “timely and accurate forecasting” that allowed the Office of Civil Defense, its regional offices, and the local governments to prepare for Maring as well as the monsoon rains that caused massive flooding.

Del Rosario said the cooperation of the people, especially those who heeded the warnings of local governments, was evident at the height of the calamity.

But casualties would have been avoided had there been “100-percent cooperation,” he said.

“In general, we are encouraging the cooperation of the general populace. We should have more public awareness and education campaigns so that our countrymen would know the risks involved in these hazards. If (the campaign is effective), we won’t have to have mandatory evacuations,” Del Rosario said.

“Their No. 1 consideration should be their safety. Even if the government could not provide all their needs, they should still evacuate if they live in high-risk areas. The government cannot always provide everything. People must have an understanding of the threat to their lives,” he said.

Pagasa officer in charge Vicente Malano said he expected the floods to subside soon with the departure of Maring.

But Maj. Rey Balido, NDRRMC spokesperson, said Central Luzon remained a “critical area” because of the low-lying towns, especially in Pampanga and Bulacan.

“We are waiting for confirmation from Hagonoy (town) if it would be declared under a state of calamity,” Balido said.

The OCD in Central Luzon said the fatalities in the area were Jeric Sorgello, 3; Renato Lacsamana, 64; Justin Viray, 1; Roman Sanchez, 29; and Lodrigario Plasilo, 53.

The OCD in the Cordillera Administrative Region listed Monching Bakidan, a criminology student, as missing. Bakidan was earlier reported dead by the military’s Northern Luzon Command.

Also missing in Cordillera are Lino Calantay and Irene Manaois.

The NDRRMC said one Rodrigo Telles, 69, of Nueva Ecija, was swept away by floodwaters and remains missing at press time.