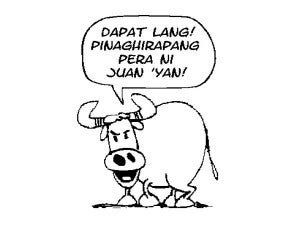 From accusing Malacañang of targeting opposition senators like him to calling for establishing the authenticity of his signatures.

This was the new tack taken by Sen. Ramon “Bong” Revilla Jr. in defending himself from allegations that he benefited from the P10-billion pork barrel scam pulled off by Janet Lim-Napoles over a 10-year period.

He has hired a handwriting expert to verify the authenticity of his signatures on documents related to the questionable release of his pork barrel to the fake NGOs, Joel Bodegon, Revilla’s legal counsel, on Wednesday said.

Bodegon said that an initial review and verification of the records from Revilla’s office showed that the senator had neither endorsed any NGO nor requested implementing agencies to transfer his Priority Development Assistance Fund (PDAF) to any NGO.

“Senator Revilla welcomes an impartial investigation of this matter,” Bodegon said in a statement on the heels of the Commission on Audit (COA) report that found that more than P413 million of the senator’s PDAF allocations from 2007 to 2009 went to dubious NGOs.

Revilla was one of the five senators and 23 members of the House of Representatives whose pork barrel funds were funneled into fake nongoverment organizations (NGOs) that Napoles had set up.

“At the same time, the office of Senator Revilla is currently doing an in-depth study and serious review of the process and evaluating options to strengthen the safeguards or security measures to ensure that his PDAF allocation is not used without his office’s consent or knowledge,” Bodegon said.

Bodegon said Revilla had hired a handwriting expert in light of the admission of whistle-blowers in the P10-billion pork barrel scam that they falsified documents covering the disbursement to NGOs of lawmakers’ pork barrel.

“A full and complete examination by handwriting experts should resolve the question of authenticity of the signatures,” said Bodegon, one of the defense lawyers at the impeachment trial of then Chief Justice Renato Corona last year.

The lawyer said Revilla was not taking the COA findings lightly “as at the very instant he learned of the controversy, he directed his staff to verify the information against his records.”

Bodegon said the records review conducted by Revilla’s staff showed that the senator did not endorse any NGO to receive his PDAF allocation.

The lawyer said this was the reason Revilla’s camp had requested the COA to provide him a copy of the documents the agency used in arriving at its findings that the senator had requested certain agencies to implement the projects to be funded by his PDAF.

Bodegon said that while legislators might endorse NGOs to the implementing agencies, it was the responsibility of these agencies to determine the legitimacy of the NGOs.

He said this was confirmed by the COA itself in the report when it supposedly recognized that the responsibility of ensuring that government funds were used in accordance with the laws and safeguarded against loss lay with the implementing agencies.

“To be fair to our legislators, the COA does not impute liability of culpability to any legislator, including Senator Revilla,” Bodegon said.

On the issue of excess pork supposedly allocated to Revilla, Bodegon said a thorough examination of the records of the Department of Budget and Management should be conducted “as there had been a finding of miscomputations of PDAF allocations by the COA itself.”

“In fact, the COA has admitted that there had been miscomputation on PDAF allocation, even double entries, including that of Senator Revilla,” he said.

Bodegon said this was especially relevant in the wake of Budget Secretary Florencio Abad’s admission that the COA finding on the supposed P3-billion PDAF allocations to former Campostela Valley Rep. Manuel “Way Kurat” Zamora was based on a clerical error.—Norman Bordadora

Sen. Revilla denies transfer of ‘pork’ funds to any NGO