In the Know: Monsoons 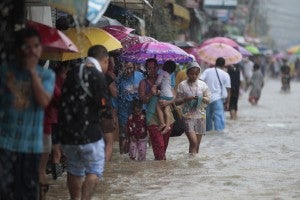 Monsoons are seasonal winds that bring heavy rains such as those that pelted Metro Manila from Sunday to Tuesday. In the photo, people wade in a flood in Marikina city on Tuesday, Aug. 20, 2013. Some of the Philippines’ heaviest rains on record fell for a second day Tuesday, turning the capital’s roads into rivers and trapping tens of thousands of people in homes and shelters. AP PHOTO/AARON FAVILA

According to the Philippine Atmospheric Geophysical and Astronomical Services Administration, the country experiences two kinds of monsoons—the northeast monsoon and the southwest monsoon.

The northeast monsoon, commonly called amihan, affects eastern Philippines from October to late March. Initially a cold, dry air mass, it comes from Siberia and gathers moisture over the Pacific Ocean before reaching the eastern parts of the country. It is characterized by widespread cloudiness with rains and showers.

The southwest monsoon, on the other hand, is called habagat. Characterized by heavy rains that last for a week, it affects the country from July to September and brings the rainy season to the western part of the country.