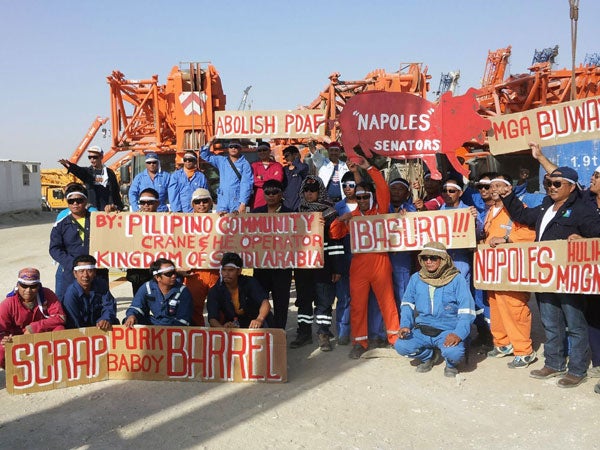 VOICE FROM THE DESERT. Filipino migrant workers in Dammam, Saudi Arabia express solidarity with their compatriots in the Philippines who are set to hold a simultaneous nationwide march Monday to protest the graft-tainted pork barrel fund. Contributed photo by Junar Elmedo

A social media initiative calling for a “million people march to Luneta” to demand the scrapping of the lawmakers’ pork barrel is shaping up as a sort of an Arab Spring spreading across the Philippine archipelago—from Baguio in the north to Davao in the south.

Just like the Facebook post that ignited the Luneta event scheduled on Aug. 26 at 9 a.m. in Manila, netizens urged outraged Filipinos to gather in town squares and plazas in a show of force to put an end to the Priority Development Assistance Fund (PDAF) of senators and congressmen amid allegations billions of pesos intended to ease rural poverty had instead gone to ghost projects and kickbacks.

Posts on the networking site urged residents of Davao City to show up at Rizal Park and come up with designs of protest shirts. No one has claimed leadership for the campaign in the city, making it a citizens’ initiative.

Similar calls were made on the Internet for gatherings in Iloilo City, either at Museo Iloilo or Plaza Libertad; in Dagupan at City Plaza; at People’s Park (Malcolm Square) in Baguio, and in the cities of Legazpi and Lucena.

“If we can’t go to the ‘million people march to Luneta,’ let’s do this in Baguio,” said blogger Simon Francis Blaise Vistro on Facebook. “Say no to Pork! Tayo ang Boss!” Vistro said. “Wear white. No group banners. No political colors. No speeches. Just us, ordinary people.”

“The protest action is the manifestation of support to the snowballing nationwide fury against rampant graft and corruption in the government,” said Janspeth Geronimo, spokesperson for a coalition of farmer groups.

The million people march to Luneta, which arose from Facebook posts, is intended to gather together citizens who are outraged over the misuse of public funds. It is intended to show the people’s anger and send the message that taxpayers want the pork barrel scrapped and that legislators implicated in the scam must be investigated and charged.

In a phone interview, Bretaña said she had not intended to be the event’s host after she shared the idea of having a gathering to air the people’s sentiment of the issue. But so many people were similarly outraged that the event seemingly took on a life of its own, with thousands signing up to join.

Even overseas Filipino workers (OFWs) have joined the movement.

At the same time, she appealed to those joining the gathering to be respectful of others.

So far, more than 7,000 Facebook users said they were going to the event, and more netizens have pledged to support it and be there in spirit.

The group Pinoy Expats/OFW Blog Awards or PEBA Inc. said in a post that OFWs would change their Facebook photos and Facebook banners in solidarity with people who would troop to Rizal Park.

One OFW, Joel Ramirez, said on the event Facebook page that even if he could not go to the event, he was supporting it because he was a taxpayer, too, and that the government owed the Filipinos an explanation on what happened to the funds.

Militant groups such as Bayan Muna have announced they were joining the gatherings in Luneta and elsewhere.

Kenneth Montegrande of the National Parks Development Committee said he had yet to confirm if the office received a formal notice of the Luneta event.

“No matter how big or small the event, they need a permit. If they’re talking of a million people, they need to coordinate with our office to ensure security and safety of facilities,” Montegrande said.

In a manner similar to Occupy Wall Street, the million people march has no leader or organizer. It was inspired by a Facebook post from music production manager Ito Rapadas that there should be a million marchers to make a compelling stand against the pork barrel scam.

One of the Facebook users who set up an events page said it would be a pocket picnic and not a rally since no one would get a permit for it.

“The thing is, the intention is still to hold a protest,” Montegrande said. “The park is open. I don’t see any reason why a permit would not be approved. We just need proper coordination to ensure that it would be peaceful.”

He added that, depending on the size of the gathering, the park authorities should be notified at least a week before the event.

“I can’t understand it except in the context of having carrots to dangle before uncooperative lawmakers,” Factoran, a member of the Former Senior Government Officials (FSGO), said of the President’s defense of the pork barrel fund.

Factoran said the President’s stand would not stop him and thousands of others from joining the gathering.

While it may seem futile for some, Factoran, who served the Cabinet of the late President Corazon C. Aquino, said the rally was necessary to deliver the people’s outrage to the Chief Executive, who allotted P25-billion PDAF in the proposed P2.268-trillion 2014 budget.

As academics, Church officials, and civil society groups stepped up calls for its abolition, Factoran predicted that public outrage would “spread as more people will be conscious of its evil.”

“The lessons of history tell us that united people can’t be resisted,” he said. “If the President will no longer change his mind, we will wait for the next administration. Somewhere a leader will emerge and listen to us.”—With reports from TJ A. Burgonio, Leila B. Salaverria and Erika Sauler in Manila; Gabriel Cardinoza and Desiree Caluza, Inquirer Northern Luzon; Delfin T. Mallari Jr. and Mar Arguelles, Inquirer Southern Luzon; Nestor P. Burgos Jr. and Carla Gomez, Inquirer Visayas; and Karlos Manlupig, Inquirer Mindanao