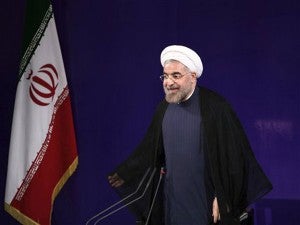 BRUSSELS – The EU’s top diplomat Catherine Ashton, who leads global talks with Tehran on its disputed nuclear drive, called for a resumption of the talks in a phone conversation Saturday with Iran’s new foreign minister.

A statement from her spokesperson said Ashton phoned the new Iranian Foreign Minister Mohammad Javad Zarif to congratulate him on his new post.

Ashton “underlined her continued determination and commitment to seek a diplomatic solution to the Iranian nuclear issue,” the statement said.

It added that she said the five permanent members of the UN Security Council plus Germany that Ashton represents in the negotiations “were ready to work with the new Iranian negotiating team as soon as they were appointed.”

“She confirmed the need for substantial talks that will lead to concrete results swiftly,” it said, adding that Ashton and Zarif “agreed to meet soon.”

Early this month Ashton called on Iran’s new President Hassan Rowhani to agree a fresh round of negotiations as soon as possible.

Ashton serves as lead negotiator with Iran for the so-called P5+1 powers, who believe the Iranian nuclear program is being used to develop an atomic bomb though Tehran insists it is for peaceful purposes.

Rowhani has said Iran was ready for “serious” talks on its nuclear program without delay.

He headed Iran’s nuclear negotiating team under reformist president Mohammad Khatami in the early 2000s, and Western leaders have expressed hope his election could herald a more constructive approach in the protracted talks.

The hardline policies of his firebrand predecessor, Mahmoud Ahmadinejad, prompted crippling EU and US sanctions against Iran’s oil and banking sectors that he has vowed to seek to relax.

But Rowhani has said there could be no surrender of the right to the peaceful use of nuclear energy that Iran claims under the Non-Proliferation Treaty.

Earlier Saturday, Iran’s atomic agency said it has about 18,000 centrifuges, including 10,000 active ones, confirming figures from the UN watchdog overseeing its disputed nuclear drive.

“At the beginning of the month of Mordad (from July 23) we had 17,000 first generation centrifuges, of which more than 10,000 are active and 7,000 ready to start work,” said Fereydoon Abbasi Davani, quoted by ISNA news agency.

“Some 1,000 second generation centrifuges have also been installed and are ready to start work,” he said at the handover ceremony for his role to Ali Akbar Salehi.

In May, the UN’s International Atomic Energy Agency reported that Iran had installed 17,600 centrifuges, including 16,590 first generation and 1,000 second generation.

Iran says it enriches uranium to five and 20 percent for peaceful purposes.

Officials in the Islamic republic say the higher level is needed for a medical research reactor in Tehran.