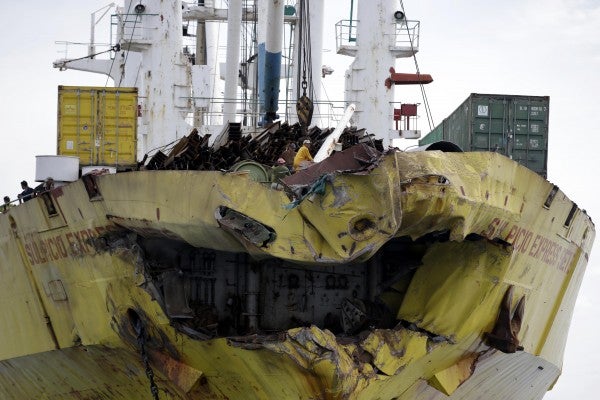 The damage to the bow of the cargo ship Sulpicio Express Siete is seen Saturday Aug.17, 2013, a day after it collided with a passenger ferry off the waters of Talisay city, Cebu province in central Philippines. Divers combed through a sunken ferry Saturday to retrieve the bodies of more than 200 people still missing from an overnight collision with a cargo vessel near the central Philippine port of Cebu that sent passengers jumping into the ocean and leaving many others trapped. At least 28 were confirmed dead and hundreds rescued. The captain of the ferry MV Thomas Aquinas, which was approaching the port late Friday, ordered the ship abandoned when it began listing and then sank just minutes after collision with the MV Sulpicio Express, coast guard deputy chief Rear Adm. Luis Tuason said. (AP Photo/Bullit Marquez)

CEBU CITY, Philippines—Five years ago, Sulpicio Lines Inc. changed its name following the 2008 sinking of its biggest passenger vessel in Romblon for a fresh start.

Now, the cargo vessel of Philippine Span Asia Carrier Corp. (PSACC) was involved in a sea collision with a passenger vessel that left at least 31 persons dead and 172 others missing.

According to Jordan Go, president and chief executive officer of PSACC, the collision between the MV Sulcon Express Seven and 2Go’s MV Saint Thomas Aquinas was the first involving the company since they decided to change its name in 2009.

He said it was a family decision to focus on the freight business instead of transporting people after the sinking of Princess of the Stars in Romblon at the height of Typhoon Frank on June 21, 2008.

“It was to have a fresh start,” he told Inquirer in a phone interview on Saturday.

Sulpicio Lines, which will celebrate its 40th year in 2013, has had 45 sea accidents between 1980 and 2008, according to records at the www.lloydsmiu.com.

This included the sinking of the MV Doña Paz in December 1987, dubbed as the world’s worst peacetime sea tragedy, which left more than 4,000 people dead.

The next year, another Sulpicio vessel, MV Doña Marilyn, sank off the island of Leyte, leaving more than 250 dead.

In September 1998, about 150 people were killed when Princess of the Orient sank in the waters of Batangas.

After the Princess of the Stars tragedy, the family decided to focus on cargo ships rather than passenger vessels and changed the name of the company to PSACC.

Records at the Securities and Exchange Commission showed a majority of the members of the board of directors and stockholders voted a resolution on Dec. 19, 2009 to change the name of company.

On April 20, 2010, the SEC approved the articles of incorporation that amended Article 1 that stated the change of Sulpicio Lines’ name to PSACC.

From a fleet of 15 passenger vessels, Go said it was reduced to two ships – one that plies  the Manila-Cebu-Manila route and another for the Cebu-Cagayan de Oro-Cebu route.

The rest of the 13 were sold, he added, displacing hundreds of employees.

“We decided to focus on freight and make sure we improve. We don’t want to let down those people who are depending on us,” he said, referring to their employees.

In the past five years, he added, they have proven the competence of their safety records as well as their staff and crew. They had also taken initiatives on risk management.

But on Friday night, its cargo vessel collided with  MV Saint Thomas Aquinas of 2Go, which later sank, in the vicinity of Lawis Ledge, Talisay,  two to three nautical miles from the port of Cebu.

Go said that in the shipping business, accidents do happen.

“This one (ship collision) will make us work harder and see what happened and how can we do further to avoid [accidents],” he said.

He declined to elaborate on what happened pending the results of an official investigation.

But their own investigating team was on board the ship to check what happened, he added.

“So far, we are constantly communicating with 2Go and are assisting in the search-and-rescue efforts to find the missing passengers.

“We condole with the relatives of the victims. Other than that, we don’t have the facts yet,” he added.

Go said their vessel was damaged and was towed back to Cebu port. None of its 36 crew members was hurt.

With report from Inquirer Research