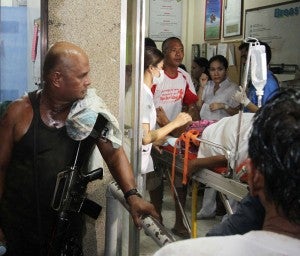 Survivors at a hospital in Cebu, central Philippines late Friday Aug. 16, 2013. Passenger ferry MV Thomas Aquinas with nearly 700 people aboard sank near the central Philippine port of Cebu on Friday night after colliding with a cargo vessel, and a survivor said he saw bodies in the sea. AP

CEBU CITY—Death toll in the ship collision in Cebu has reached 24 as rescue operations continued to find the missing passengers, according to the Philippine Coast Guard.

“Right now, the Navy and Coast Guard divers were already there in the site. We have now volunteer divers here and we are organizing them for their safety”, said Azcuna who manned the Incident Action Plan Center based in Talisay City fishport in Barangay (village)Tangke, Talisay.

Azcuna said they had yet to determine the number of missing passengers although 2Go company reported that MV St Thomas Aquinas had 841 people on board during the accident.

This means that 153 persons remain unaccounted for as of posting time.

In a statement posted on its website, 2Go said the vessel had 723 passengers and 118 crew on board and 104 equivalent 20 footer container units (TEUS).

The vessel has an authorized capacity of 1,010 passengers and crew and 160 units 20 footer containers.

MV St. Thomas Aquinas, which came from Surigao and Nasipit port, was bound for Cebu port for a brief stopover  10 p.m. on Friday before heading to Manila.

As it was entering the Cebu port about 9 p.m. in the vicinity of Lawis Ledge, Talisay located two to three nautical miles from the port of Cebu, the vessel was allegedly hit by MV Sulcon Express 7 of the Philippine Span Asia Carrier Corp., formerly called Sulpicio Lines Inc.
The impact caused the vessel to tilt on its side and sink.

No one was hurt among the 36 crew members on board the cargo vessel, which was heading to Davao.

In a statement, 2Go said that after the collision, the crew of the MV St. Thomas distributed life jackets to the passengers and carried out emergency abandon-ship procedures.

At the same time, the ship’s officers sent a distress signal to the nearest Philippine Coast Guard Station to alert them for immediate rescue operations.

Azcuna said they could not determine yet which vessel was at fault since the focus now was on search and rescue.

Among those involved in rescue operations were personnel from the Philippine Navy, Coast Guard, PSACC and 2GO Group, which dispatched two of its fast crafts and passenger ship M/V St. John Paul.

Of the 24 fatalities, 19 were brought to the Cosmopolitan Funeral Homes on Junquera Street in Cebu City.

As of 9 a.m., management of government-owned Vicente Sotto Memorial Medical Center said that since last night 62 passengers had been brought to the hospital including one who was declared dead on arrival.

Of the number, 52 had been discharged at VSMMC Trauma Center, eight were confined (3 children , and 5 adults) and two still under observation.

2Go said meal packs and dry clothes had been distributed to passengers.

Those needing medical attention were attended to by onsite medical personnel while others were brought to the hospitals.

The rest of the passengers have been offered accommodations at a nearby hotel. With a report from Connie E. Fernandez and Carmel Matus, Inquirer Visayas; AP