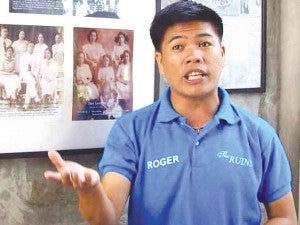 ROGER Lucero has a funny way of telling the story about The Ruins in Talisay City, Negros Occidental. Photo by Carla P. Gomez

WHO says history is boring? Not when listening to a former toilet cleaner who is now making waves as a wacky tour guide of the famed The Ruins in Talisay City in Negros Occidental.

Roger Lucero, 26, has become a sensation on YouTube, a video-sharing website, after someone identified only as orsalia uploaded a footage of him conducting a tour on The Ruins that left the guests in stitches. Titled “Roger the funny guide of The Ruins Negros Occidental,” the video has so far garnered 150,634 hits and 236 comments as of Aug. 11.

One of those who posted a comment was Glenda Cura. It read “Roger you are so funny. Kung ganito ang lahat na tour guides di ako mabo-bore!!!” (If only all tour guides are like him, I won’t get bored.)

“If he’s our History teacher at school, I’ll always get a hundred percent grade,” wrote Miyoko Ishina. “He’s speaking like no pause at all!! Rapping? O sobrang galeng!!!! (Super great) I wanna go there too.”

In the video, Lucero injected humor while telling the tale of The Ruins, one of the most fascinating ruins in the world.

Speaking in Filipino and English, Lucero narrated to his guests how the mansion was built in the early 1920s by Negrense sugar baron, Don Mariano Ledesma Lacson in honor of his first wife, Maria Braga, a Portuguese from Macau, who died in an accident while pregnant with their 11th child.

The grand mansion, of Italianate architecture with neo-Romanesque twin columns, was built in the middle of a sugarcane field. The two-story structure had a floor area of 903 square meters with 10 bedrooms and a belvedere where the family gathered to watch the sunset.

But Lucero said Don Lacson remarried, this time to Concepcion Diaz from Talisay. “He was not contented with 10 children, he added three more,” he said in jest.

Don Lacson’s sugar plantation of 440 hectares was divided among the 10 children by his first wife after drawing lots. The mansion went to Mercedes Lacson who married Manuel Javellana from Jaro District in Iloilo.

“Guess what? (The couple) had 12 children. It was because there was no TV at that time,” Lucero explained.

With the consent of Don Lacson, the mansion was torched in the early part of World War II by the US Armed Forces in the Far East, composed of Filipino guerrillas, to prevent the Japanese forces from using it as their headquarters.

It took three days of inferno to bring down the roof and the thick wooden floors of the mansion that was never rebuilt.

“It was a very good idea they torched it down because at least, I have a job now,” Roger told his audience.

Showing the photo of Don Lacson, Lucero said the patriarch had 13 children because he was good looking.

“He was a lookalike of Dr. Jose Rizal. When he grew older, he became a lookalike of Berting Labra (an actor-comedian who died a few years back),” he added.

The columns remain shiny because egg whites were mixed with the cement during the finishing, the tour guide said.

Someone asked him where the family got all the eggs. “I’m sure it didn’t come from me,” was his reply.

“The family had a farm before. It might be the reason they don’t have a farm now. Joke,” he said.

Lucero said the first letters of the names of Don Lacson and Braga were engraved on the columns of the house, pointing to what looked like Es that faced each other.

These were actually two Ms engraved sideways—for Mariano and Maria, he said.

“Someone asked me why the Ms were sideways and not upright. I said that if it was engraved upright, it would look like McDonalds,” he said.

Before he ended his presentation, he introduced himself again to his audience. “My full name is Roger Lakson. But I am not related in this family because my Lakson is L-A-K-S-O-N.”

Lucero first worked for Raymond Javellana, Lacson’s great grandson, as a houseboy before he was transferred to clean the toilets at The Ruins. He is married to Jona Lindayao with whom he has a son, Nathaniel, who is a year and eight months old.

Javellana decided to promote him into a tour guide when he saw Lucero entertaining the guests by telling them stories about the history of the mansion he probably heard from the other guides.

“He (Lucero) knew his facts and he was witty,” said Javellana, who now manages The Ruins. “We need more Roger Luceros in the tourism industry in order to make every visit wholesome and entertaining.”

He acknowledged that he discovered his love for history when he was assigned to The Ruins because he became fascinated by its past.

To prepare him for his new job, Lucero read a lot about history, listened to other tour guides, and memorized what he heard and read.

He felt fulfilled over his promotion because it showed that his boss had faith in his potentials and was willing to give him a chance.

Lucero became a hit among guests. What makes him different is his sense of humor.

“I am glad I can make people happy when they come to visit,” he said.

He loves being able to impart information to people and see them laugh. He also draws satisfaction and considers it a reward when he sees that he made their visit worthwhile.

His advice to college dropouts: Never give up and underestimate your abilities. Have self-confidence. Persevere. Don’t lose hope. Engage in self-study.

Powerhouse Kings, Beermen seek to bounce back from shock losses