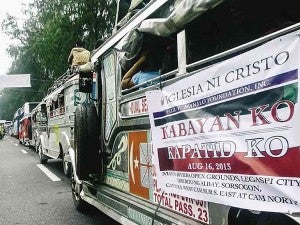 SOME of the jeepneys hired by the Iglesia ni Cristo for its assembly and humanitarian mission in Sto. Domingo, Albay, fill the road leading to the assembly site. LEO MARTIN GANACE/CONTRIBUTOR

LEGAZPI CITY—Albay Gov. Joey Salceda on Friday suspended classes in all levels in the province due to the unavailability of public transport with the influx of over a million members and guests of the Iglesia Ni Cristo (INC) in Sto. Domingo town for a one-day assembly.

Salceda, in his Facebook wall statement, said classes in all levels were suspended at 10 a.m. as a public welfare and safety measure.

Transport services in the province were put to a virtual halt after jeepneys and buses were hired by INC organizers for the assembly held in Sitio Riviera, Barangay Lidong, in Sto. Domingo town.

The INC in Legazpi hosted the assembly dubbed as “Lingap sa Mamamayan” to provide humanitarian assistance not just to the group’s members but to the local community through gift-giving, medical and dental missions.

Insp. Arthur Gomez, spokesperson of the Albay police office, said by phone that police received reports of thousands of commuters and students who were stranded because of the event.

He said the INC event created a huge traffic jam on Maharlika Highway in Barangay Lidong, Sto. Domingo, where a long queue of at least 7,000 buses, cars and jeeps were parked along the right and left lanes of the 4-kilometer highway from Barangay Bigaa in this city to Barangay Lidong.

Gomez, however, said that despite the heavy traffic, no untoward incident was reported.

The government offered free rides on military trucks and buses for the stranded commuters.

Sto. Domingo Mayor Herbie Aguas, in a phone interview, said he welcomed the INC event, as it was a big boost to the town.

Salceda said the INC gathering could be the biggest human assembly ever in Albay. He said that since there are at least 120,000 members of the INC in Albay, he considered the rest of those who attended the Sto. Domingo assembly as “the biggest number of domestic tourists we ever had.”